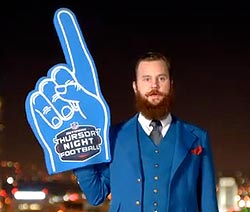 The Olympics aren’t even half over, but for many Americans, it’s nearly time to turn to the country’s favorite sport: Football. With the season fast approaching, NFL Media wants to expand its fan interaction beyond just the diehards to the more casual watcher.

Rather than using bone-crunching hits and amazing plays, a new effort for NFL Media (which includes properties such as NFL.com and NFL Network, but not the league itself), uses a deadpan (and awesomely bearded) character in a three-piece blue suit in untraditional locations (a mountaintop, a wheat field, on top of a skyscraper) to sell the fun of being a football fan, using the tagline, “It’s serious fun.”

“It’s not like we need to sell the dedicated fan on football because they already love it,” David Angelo, founder and creative director for David & Goliath, the agency behind the campaign, tells Marketing Daily. “But for the people out there, the once-a-month watchers, those people don’t see it the way [dedicated fans] do. There’s so many entertainment options out there to choose from, so we need to get them to think about it differently.”

In the commercials, the character speaks directly to the camera in a subtly ironic way that addresses football in a way to suggest it’s less about the strategy of warriors heading to battle than it is about having fun with friends in a social setting. “Do you like things like: punts? And kickoffs? And blitzes and blocks? And … penalties?” he asks in the commercial on the skyscraper. “That means you’re going to enjoy this.” The camera cuts to a wider shot of the character wearing a giant foam finger. “Ding Dong. ‘Who is it?’ ‘Football. Thursday Night Football!’” The commercial closes with the character saying the “serious fun” line while the city lights up in fireworks.

The campaign (which will use the character digital, social, print and other media, as well), is meant to convey football as a form of entertainment that doesn’t require in-depth knowledge of play formations and player stats to be enjoyable, Angelo says.

“Our character here is much more approachable” than traditional football advertising, he says. “First and foremost, he’s not your traditional football character. The great thing about him is he’s very distinctive. What you see is what you get. When you hear him talk about football, and talking about winning, and man hugs, he does it in a way that’s approachable. He’s a guy who’s talking about how fun it is in a unique way.”