Jordan Back On Court For Hanes 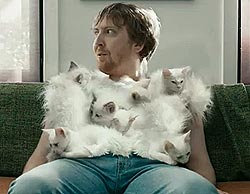 Hanes is bringing Michael Jordan back in a campaign for Hanes' ComfortBlend Collection.

The company says the new collection is a 50/50 cotton/poly blend developed for softness. Thus, the new effort, via AOR Richmond, Va.-based The Martin Agency, includes a TV ad that exaggerates that quality. The spot shows a group of young men at home, but one of them is wearing white kittens as a shirt. They are literally living, purring kittens.

One of the guys suggests a Hanes ComfortBlend undershirt might have been a better choice as it would have been just as soft but also an actual shirt. Jordan walks on, looks at the guy's kitten shirt and just says “Dude? Wow.”

The ad will run on Major League Baseball (TNT, ESPN, MLB Network) and on entertainment networks such as ABC, TBS, Comedy Central, Spike and SyFy. In addition to the TV spot, the campaign will also be supported on Hanes social channels through product sampling and video seeding.

The new effort follows a TV campaign in May, “Tags are annoying, so we got rid of them. Go tagless” for  a line of products Jordan helped roll out in 2002.

Jordan, who has been in Hanes commercials for 22 years, has done ads for the brand with the likes of Charlie Sheen, who was jettisoned in 2010 after his domestic-violence arrest, Cuba Gooding, Jr., Damon Wayons, Jackie Chan and Matthew Perry have also appeared in ads for Hanes men's undergarments, while Marisa Tomei and Christina Applegate are among those who have appeared in ads for women's garments.

The Winston-Salem, N.C.-based HanesBrands, which Sara Lee spun off six years ago, also makes Champion, Playtex, Bali, L’eggs, Just My Size, Barely There, and Wonderbra. The company this year made a move to focus on its core business by spinning off so-called "imagewear" (garments bearing printed images) units in Europe, and making Champion and Hanes the source of branded printwear in the U.S.