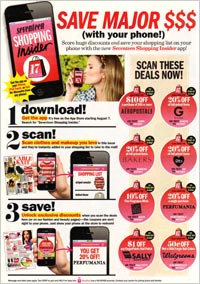 Even the most addicted mobile shopper may get tired of scanning the 250 mobile-activated images in the new issue of Seventeen. In a major push for its back-to-school issue, the magazine has partnered with a wide range of marketing partners to mobilize the in-print experience and turn the magazine into an interactive shopping experience.

Using the new Seventeen Shopping Insider app, readers can scan images associated with shopping bag icons found next to 250 spots across the issue. The scans can add items into a mobile shopping list or unlock coupons in the app. According to Seventeen’s mobile activation partner Nellymoser, this is the broadest use of mobile activations in any issue from a top-100 magazine.

Eighteen advertisers participated in some aspect of the print and mobile app program, including American Rag, Aeropostale, Walgreen’s, Office Depot and many others. “The whole program serves as a bridge from the magazine to the store,” says Seventeen’s Associate Publisher of Marketing, Howard Grier. Driving teens from page to purchase has always been the goal, of course, but with a mobilized shopping list and deals on their devices, “this literally facilitates that,” he says. “You can save it from the magazine and bring it into the store, but this also gives you an incentive to shop as well.”

Seventeen has already seen the power of mobile for its young audience. The Seventeen Ultimate Flipbook app has been in market almost a year and features product flipbooks that are refreshed regularly with new editorial and advertiser content. “Pre-shopping” is a big deal with this demo and a perfect match for the handheld device.

“The biggest lesson we learned from that app is that girls can’t get enough,” says Grier. “They love to pre-shop. We might put 100 flipbooks up for them. They ask for 150.” The flipbook apps has been downloaded over 250,000 times in less than a year. Seventeen reports that even before promotions and press coverage of the new Shopping Insider it was seeing thousands of downloads.

The Seventeen app itself is both a container for the scans, mobile coupons and shopping list as well as another marketing platform for the partnered brands. A Video Spotlight section features Keds, Sally Hansen and L’Oreal, for instance, while sponsors like American Eagle and PacSun have flipbooks of clothing and style ideas in the app as well. In order to encourage daily use the app also unlocks each day a Daily Freebie sweepstakes that allows users to enter to win specific prizes from sponsors.

The use of so many watermarked images and the connection between scanning images and adding them to the shopping list make this execution unique, says Roger Matus, EVP, Nellymoser. “This experience would be impossible to do with QR codes,” he tells Mobile Marketing Daily. “For example, on page 76, there are 15 pairs of shoes shown. Each pair of shoes has its own watermark. Scan your favorites and automatically add them to your shopping list. Imagine how the page would look if it also needed 15 different QR codes?”

By scanning items from the magazine directly into a shopping list one can carry into the store, the mobile activation streamlines but follows a familiar media habit. Dog-earing, tearing or bringing magazines and pages into stores is a commonplace. Now the experience of ripping ideas pages and tearing coupons is centralized into the phone itself.

The Seventeen effort exemplifies a companion app model that magazines have been embracing this year. Rather than have readers employ a third party app to scan a code, an embedded scanner in a branded magazine app keeps the reader within the magazine’s environment where a range of deals and the full slate of sponsors have a voice. According to Nellymoser, the approach also allows the magazine to control metrics and reporting.

Mobile activation was once a hobby for some magazines perennially testing the model. As ad money continues to gush away from print, publishers are not only looking for ways to add value to print buys -- but especially to tie those buys to the more attractive digital platforms.

magazines, mobile
1 comment about "'Seventeen' Mag Gets Super M-Activated For Back-To-School ".
Check to receive email when comments are posted.
Next story loading