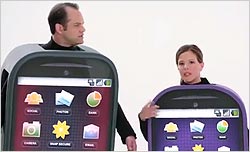 With smartphones and tablets becoming more prevalent among consumers, the need for security for these mobile devices will become even more necessary in the coming months and years.

SnapMyLife, a company that develops cloud-service applications for consumers, is launching a first salvo in a bid to gain an early foothold in this growing market with a new television, direct marketing and social media campaign that breaks this week. The campaign touts the company’s Snap Secure app, which is available for BlackBerry and Android phones.

“For the past few years users have been downloading "free apps" by the thousands. This has led to a very large increase in malware and viruses on mobile applications,” Michael Subhan, vice president of marketing at SnapMyLife, tells Marketing Daily. “If you think of your PC and all of the software out there to protect your desktop or laptop, the idea of protecting your mobile phone then becomes very relevant.”

The television campaign, which includes four spots, introduces a family of “living smartphones,” who discuss the dangers they face and the need for smartphone security. In one spot, the father appears in a coffee shop, loudly announcing all of the confidential information that is available on his phone. Another commercial depicts the man introducing his family. Upon realizing his son isn’t present, he uses SnapSecure’s location service to find him.

“The use of the Smart Phone Family educates users on the application and the need for mobile security. It also puts a human face on security technology,” Subhan says. “People can't always identify with all the features and tech lingo that security products provide, but being a dad or a mom and wanting to protect your family -- everyone gets that.”

The campaign, from R2C Group in Portland, Ore., will run on several national cable networks, including A&E, CNBC and TrueTV.  The effort (which will also be supported with social media outreach on Facebook, Twitter and YouTube, as well as search, mobile and outdoor advertising) is the company’s first television campaign, Subhan says.

“Since we are primarily a mobile application development company, our focus has always been on mobile marketing,” he says. “But as we continued to talk about the importance of not just mobile security, but also personal and family protection, it became clear that an integrated campaign was the best way to convey just how comprehensive.”