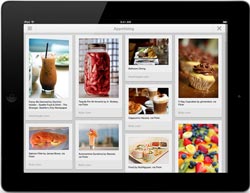 The highly visible (and predominantly visual) social network of late 2011 and 2012 is finally making its way onto key device platforms: the iPad and Google’s Android. Yesterday, Pinterest launched an iOS version specifically for the iPad and an Android version that adapts to smartphone and tablet screens.

In a blog post announcing the device extensions, the company said that Android owners have been “very vocal” in asking for a Pinterest version for their OS. The app in Google Play presents the user with a two-column scroll of pinned items on smartphones and three columns on 7-inch tablets. A Kindle Fire version of the Android app will be available later this week in the Amazon App Store.

Claiming that iPad users “may have the best Pinterest experience yet,” the company is giving Apple tablet owners a range of ways to save and reorganize their pins. At the same time, Pinterest is upgrading its months-old iPhone app to enhance speed, and brings a new 2-column layout to match the Android version.

Pinterest and its social sharing for images proved to be the social media success story of 2011. Since June of last year, the site saw membership and traffic grow exponentially. According to a recent survey of publishers by Shareaholic, Pinterest has become a greater source of referral traffic than Twitter, Google+, StumbleUpon and Bing.

Because of its visual nature, many brand marketers have flocked to Pinterest in order to get in on the massive amount of pin sharing that goes on here. According to social media metrics site ZoomSphere, Nordstrom, The Perfect Palate, The Beauty Department, Real Simple magazine and Better Homes & Gardens magazine are the top five most followed commercial entities on Pinterest.