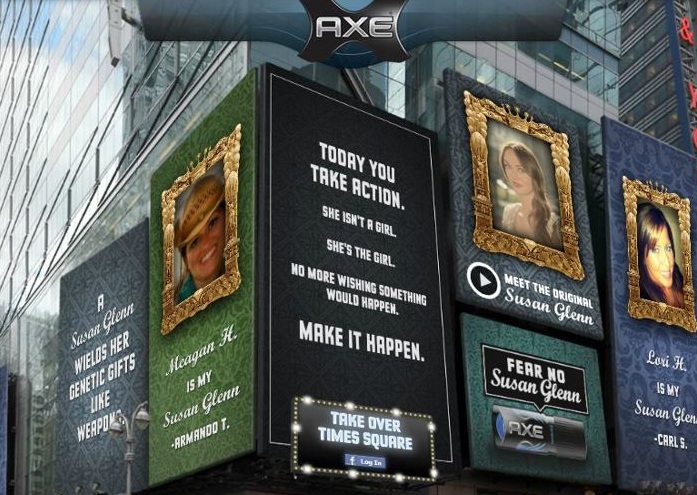 The creative builds on the basis of the Axe "Susan Glenn" campaign. The name -- created by Axe -- is a pseudonym that represents the special girl in a guy's life he hasn't had the confidence to approach.

Greenfield wrote, directed and stars in the series "Finding Susan Glenn," which follows his character as he develops the courage to interact with his "Susan Glenn." The first two episodes can be viewed on Facebook.com/Axe and YouTube.com/Axe, and the subsequent four in the series will be released the week of Aug. 20.

To accompany the Web series, Axe will kick off a nationwide road trip to help real guys across the country approach their "Susan Glenns." The trip is powered by Axe's social media channels, where fans can share their "Susan Glenn" stories, get tips on how to talk to a "Susan Glenn" and make epic declarations to their own "Susan Glenn" on Facebook and Twitter.

"'Susan Glenn' is more than a name, it's a timeless truth for every guy that has ever walked down a school hallway," said Matthew McCarthy, senior director of brand development for Axe, in a release. "Giving guys courage to reach out to their own 'Susan Glenn' is exactly what we strive to accomplish with this campaign, which remains true to the brand's essence."

An interactive experience at www.FearNoSusanGlenn.com uses Facebook as a platform for guys to declare their own "Susan Glenn" in a virtual Times Square environment. Using 3D mapping, guys take over Times Square by uploading photos of their "Susan Glenn" on numerous billboards, after which she can navigate throughout the streets and buildings, create a slideshow of her images on the billboards and share the experience on Facebook.