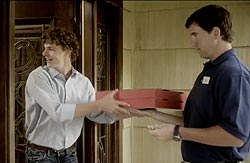 A new ad campaign plays with the idea of NFL star Eli Manning as a regular Joe who never played football. The effort for Mississippi-based BankPlus is meant to support the financial institution's position that it treats everyone the same, famous or not.

The ads, via The Ramey Agency, which brought in Los Angeles-based Bueno Films to produce, imagines the quarterback as a pizza delivery man in one spot, and a children's entertainer in another. The ads suggest even the lowly pizza porter gets star treatment.

"We're capturing a 'what-if' world, a parallel world, one in which the famous sports celebrity Eli Manning is just an everyday man," said Albert Kodagolian, who directed the spots, in a statement. "The scripts are wonderful, and they've allowed us to craft humorous, honest, and beautifully cinematic stories that will engage the audience and elevate the BankPlus brand."

Rob Armour, CMO for the Mississippi-based BankPlus, said the agency, director and production company were tasked with creating something different for the category "that cut through the clutter, which is sometimes hard when your spokesperson is so well known," he said. "Bueno helped us create an alternate world where Eli is a different sort of Eli Manning. The concept plays a little joke on the viewer but Bueno and Albert Kodagolian made sure the brand payoff remained the focus."

That  could be a challenge as Eli and his brother Peyton are among the most endorsement-friendly athletes in the NFL, or any sport. The New York Giants QB, who led the Giants to a Super Bowl win this year, makes a reported $7 million per year in endorsements, still about half of what his brother, quarter back of the Indianapolis Colts, made. The only other NFL player other than Peyton who makes more is Tom Brady. Eli's deals have included DirectTV, ESPN, and Oreo, among others.