Customer Satisfaction With Autos At A High 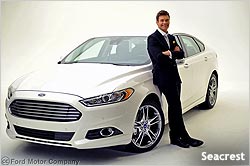 Customer satisfaction with the automobile industry has improved for a second straight year, with a 1.2% increase over last year to a level that matches the industry's 2009 ranking, per the American Customer Satisfaction Index (ACSI). But the Dearborn, Mich.-based index says aggregate customer satisfaction -- across all industries -- was flat in the second quarter, at 75.9 on a 0-to-100 scale.

The Index covers a lot more than the auto business. Developed at the University of Michigan's Ross School of Business, the research derives data culled from interviews with roughly 70,000 customers annually. It measures satisfaction with more than 230 companies in 47 industries, as well as services, programs, and Web sites of federal government agencies.

The study says this year’s record score in the auto sector is due to improvements in quality rather than value or price. The latter was the case in 2009, when sales were driven by dealer incentives and the government’s “Cash for Clunkers” program.

Domestic nameplates showed the greatest improvement overall in the Index, but still trail European and Asian cars. Honda and Toyota have suffered for quality problems and recalls.

“The difference between the industry’s high marks for customer satisfaction in 2012 versus 2009 is that customers are responding to better quality rather than price promotions,” said Claes Fornell, ACSI founder, and Ross professor of business administration. “Overall industry sales are up compared to a year ago despite higher prices. An ongoing commitment to quality seems like a workable formula for sustaining both customer satisfaction and sales growth.”

About 60% of the brands showed upticks in ACSI scores versus last year. Four of seven Asian nameplates, two of three European carmakers, and six of nine American brands all earned higher ACSI scores.

Among the U.S. automakers, Ford leads at 86, with a 1% increase. General Motors follows at 84, and while Chrysler is in last place overall, the Auburn Hills, Mich.-based automaker made the most progress in customer satisfaction of the domestics with a 4% increase to 81.

A surprise in the luxury region of the auto market is Lincoln, which Ford is hoping to revive as a lower-volume brand. It leads the category with a 5% gain to 90. The index points out, however, that the lead reflects a strong and dwindling (meaning older) fan base.

Lexus follows at 89, up 2%. Buick gains 2% to 87, while Cadillac dips 1% to 86. BMW jumps 4% to tie Cadillac at 86. BMW regains its customer satisfaction prowess at the same time as the company achieves its second-best-ever operating profit.

Above-average are Hyundai, Mercedes-Benz, Toyota, and Volkswagen. Those just below average are Ford division (-1%), Honda (-2%), Jeep (+5%), and Nissan (-1%). GM’s Chevrolet rises 2% to match the average at 84. The ACSI loss for Toyota’s namesake brand is enough to strip away its number-one title from 2011, while Honda’s downturn places it below average for the first time in ACSI history.

Mazda and Kia, at 82, are the only two Asian brands at the lower end of the list. While Mazda increased 4% this year to match its all-time ACSI high, the study says the company continues to be a below-average performer compared with other brands.