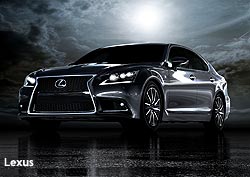 Toyota Motor Sales, U.S.A. (TMS) says it is in the midst of rolling out 19 new or updated Toyota, Scion and Lexus products into U.S. dealerships this calendar year. Bob Carter, SVP, automotive operations at the Torrance, Calif.-based TMS, says the launch volume is "a record for our company," which has been in the U.S. for 54 years.

Carter, who spoke broadly about the company's recovery from natural disasters and consumer-perception problems and its plans for the year and beyond at last week's J.P. Morgan Automotive Conference in New York. New products will, he said, set the tone for the year, adding that the raft new and revised products the company started introducing late 2011 will represent half of its total growth in 2012, in which the company will have introduced nine new or updated products along with models under its new F performance sub-brand.

Lexus is, per Carter, getting the big focus this year. "The lead product for our product blitz is the all-new GS sports sedan with a new, more emotional design which debuted in late January," he said, adding that the new version has lifted GS sales by more than 400% for the year.

Carter said the company is also planning pure-electric vehicles. "Electric vehicles have been getting some negative press lately, but we think they do have a role to play in the portfolio of future products," he said, adding that the role will be limited because of battery technology, costs and range. "So to begin testing the waters on consumer acceptance, we’re introducing two electric vehicles this year at different ends of the spectrum."

Those will be the RAV4-EV, with a potential range of more than 100 miles on a single charge, per Carter, and an electric version of the new Scion iQ, called the iQ-EV.

"We plan to bring these vehicles to market in low volume," he said. "But we will learn from them and continue working on battery technology that will best meet the needs of consumers in the future."

Reporting that TMS sales were up 26% for July and about 30% year-to-date, Carter noted the company, now past its tsunami-related supply issues, was the top retail brand in in the U.S. last month for the fifth consecutive month, with Camry leading the all-important mid-size segment in sales with a 60,000-unit lead over second-place Honda Accord last month.

The automaker projects it will sell two million units in the U.S. this year, which Carter said represents a 20% improvement over 2011.

Part of that, conceded Carter, is better economic conditions that will support sales drivers: cars, credit and confidence. He said while the wild card is confidence, pent-up demand and low interest rates should drive sales to around 14.3 million across the industry this year, nowhere near the 16 million plus from a few years ago, but a long way better than the recession -- and a million and a half units higher than last year.

Meanwhile, the automaker will hold its U.S. dealer count to around 1,500, per Carter, who said dealers will spending $1 billion this year alone on facility improvements.

The other U.S. strategy that helps Toyota keep profits up is that more vehicles sold in the U.S. are being built here. The company has a new plant in Mississippi to build Corollas and is expanding Highlander production in Indiana, RAV4 and Lexus RX production in Canada, engine production in Alabama and transmissions in West Virginia.

Like Ford, the company also has an office in Silicon Valley so it's close to the brain trust it hopes to mine for in-vehicle media platforms. Carter said 70% of the vehicles Toyota sells in the U.S. are now made here and comprise 75% local-supplier parts. "In short," said Carter, "During the past eight months, Toyota has hired or announced 3,500 new jobs and will invest an additional $1.6 billion in North America."