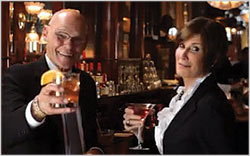 Politically opposed campaign advisors/political commentators/spouses James Carville and Mary Matalin are making the most of the national elections by endorsing … brands.

In the Mitsubishi ad, the two argue over the thermostat setting in their home. (Carville: “The issue in this house is my comfort.” Matalin: “It’s the energy bill, stupid.”)

For Maker’s Mark, the pair is starring in videos and TV ads supporting the brand’s “Cocktail Party” campaign, which advocates putting aside political differences to get together over Maker’s Mark cocktails.

In one ad, they manage to agree that “it isn’t about” the Tea Party, Green Party, Independent Party, Libertarian Party or Republican or Democratic parties … “It’s about the Cocktail Party.”

Now, four 30-second spots are set to air on Comedy Central (starting with “The Colbert Report” on Aug. 27 and running through Nov. 29), according to a brand spokesperson.

Fans are being encouraged to formally join “the Cocktail Party” by liking the brand on Facebook.com/MakersMark; they can also opt to share and tag their friends in the Maker’s Mark “Cocktail Cabinet.”

The site also offers campaign-related items like free desktop and mobile wallpaper loads, and information about a series of Cocktail Party events. Three of the events were held in Austin, New York and San Francisco; the last will take place on Nov. 3 at the brand’s distillery in Loretto, Ky.

Earlier in the campaign, fans voted through social media to elect the “official cocktail” of the Cocktail Party. (Winner: “the Conservative” -- a Presbyterian made with Maker’s Mark, club soda, ginger ale and a lemon twist.)