Nissan 'Kinects' With Consumers For Pathfinder 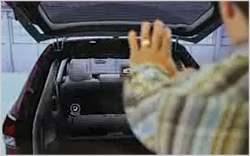 Nissan is putting a virtual vehicle experience in real showrooms to tout the Forthcoming 2013 Pathfinder SUV. The company and its digital agency Critical Mass have created a system based on Microsoft's Kinect, that exploits Kinect's natural user interface (NUI) technology. The Pathfinder Kinect platform allows consumers to play around with the vehicle at dealerships, although the Pathfinder is not actually in dealerships. The vehicle goes on sale in the fourth quarter.

In essence (and in case you haven't already used it for games), Kinect enables users to interact with the virtual world with head, hand, arm, leg and walking and leaning movements.

"'Kicking the tires' is a critical step in a consumer's car buying process. People want to see the cars first. It's a visceral thing. See it. Touch it. Drive it," said Jon Brancheau, VP, marketing, in a statement. He says the program helps bridge a gap. "What happens if the dealer doesn't have that 'dream car' on the lot, or that car has not been produced yet? How many sales are left on the table when they can't put their customer in the desired car, and make the critical physical connection to close the deal?"

The Kinect platform also allows for the kinds of virtual vehicle customization tools that most automakers now have on their consumer sites. Nissan says says the platform, which will be in dealerships through the end of November, allows users to "step" inside to experience the upholstery, legroom, entertainment system, and other details.

Nissan says it will roll out the Pathfinder Kinect Experience to 16 Nissan dealerships in 13 states initially, with each dealer getting a Kinect for Windows-based kiosk, a computer, a TV and other hardware and software. Shoppers first take a basic tutorial on how to use physical gestures on Kinect to activate "hotspots" on the Pathfinder image projected onto a TV screen.

Nissan actually tried out the platform at auto shows this year before there was a physical Pathfinder to show. Said Erich Marx, Nissan's head of interactive and social-media marketing in a video about the program: "It let us build awareness, familiarity, buzz and excitement about Pathfinder ten months before launch." He said the platform lets consumers experience the vehicle in different environments and while customizing colors and features. "And we can tailor that experience to the different venues we bring this technology to."

Brancheau said that since the Kinect platform allows the automaker to generate excitement about new models before they're available, "it's a powerful pre-sales tool that has the potential to redefine the way consumers think about the dealer experience."

Nissan says that, pending success of the pilot, it may extend the Kinect for Windows experience to its 1100 dealerships nationwide.