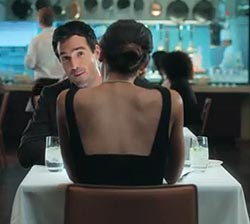 Mercedes-Benz USA (MBUSA) on Monday launched a new campaign to promote its mbrace2 telematics platform. The campaign centers on a 30-second spot, "All From One Place," that will break during the 2012 U.S. Open, of which Mercedes-Benz is a presenting sponsor. There are also extensive digital and social media executions, per the automaker.

The new version of the telematics system was introduced at this year's Consumer Electronics Show. Mbrace2 has features like "Travel Zones" and so-called "geo-fences" which delineates where someone (one's driver-aged kids) can and can't go, Curfew Minder, Driving Journal, Speed Alerts, Valet Protect and Remote Horns & Lights. It also has "Mercedes Benz Apps," a suite of in-vehicle versions of social media platforms as well as things like Google Local Search. The company says it also includes update software that automatically updates apps via the cloud.

The new spot puts the guy in various scenes -- in a stadium full of fans, in front of a burning house, on a stock exchange floor, in the middle of violent storm, at a party and on a date -- in which he talks to the camera about how the system helps him optimize his daily life with sports information, weather, business news, restaurant listings and such.

The Montvale, N.J.-based MBUSA says that after it debuts on CBS during The U.S. Open, the ad will continue in rotation through early November, including on the 2012 Emmy Awards on ABC, NFL games on CBS and throughout network series season premiers such as "The Office," "Revenge" and "Smash."  The automaker says it will also run the spot on cable channels like Bravo, E!, ESPN,  Discovery, The Food Network, National Geographic, TNT and USA.

The U.S. sales arm of the German luxury brand is also doing a digital component of the campaign, but the focus is tablet versions of publications in auto, tech, news and business verticals. Autoweek, Engadget, Bloomberg, CNNMoney, Forbes, The New York Times and The Wall Street Journal will get the ads. The mbrace2 platform will also get the spotlight in custom sponsorships on landing pages of both Slate and Wired according to the company. Also, the company is running a program where people searching for information about mbrace2 on Google, Yahoo, or  Bing, or on social channels will be connected to Mercedes' content on mbrace2. By way of example, the company explains if you search "mbrace2" on Google you get a text ad that you can click to go to mbrace2 content on MBUSA.com. On social media, people with interests in auto or tech content will get mbrace2-sponsored posts.

The automaker says mbrace2 messaging will also be featured on the MBUSA Facebook page with a dedicated mbrace2 tab coupled with a takeover of the MBUSA YouTube Channel.