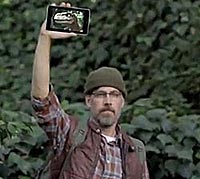 Google on Tuesday took the rare step of promoting a retail product directly on its home page.

In this case, it's touting the Nexus 7 tablet, its $199 answer to the iPad and Kindle Fire. An image showing the top of the device peeks out below the search box on the Google home page, with a link to its Google Play store. Clicking through takes users to a product page for the 8 GB version of the Nexus 7 and a limited-time offer of $25 in credit to spend in the store.

Google's prominent push for the Nexus 7 harkens back to its home page ad in early 2010 for the Nexus One smartphone, in its first ill-fated attempt at direct retailing online. It also ran an ad for a short time on Google.com in connection with launch of the Android-powered Droid smartphone in late 2009.

Aside from offering a link to its Chrome browser, Google has remained committed to keeping its home page virtually ad-free. But there is little question that it could command sky-high ad prices as the most visited site on the Web.

Google's infrequent house ads enjoy complete share-of-voice on the page, in addition to drawing a huge audience. That should give a further lift to the Nexus 7, which Google launched in late June to solid early reviews and strong initial demand.

In a more traditional marketing vein, the company last month launched a TV spot for the 7-inch tablet highlighting features like search, Google Maps and games. But with Amazon expected to launch a new version of the Kindle Fire next week, and Apple said to be introducing its own 7-inch tablet, gaining ground in the category won't get easier for Google.