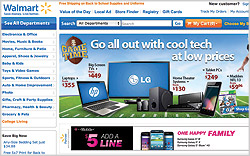 A fine-tuned on-site search engine can drive up conversions and page views. Wal-Mart Stores said its Wal-Mart Labs research and technology hub built a new search engine for Walmart.com from the ground up. The engine relies on semantic search technology to anticipate the intent of a shopper's search, similar to Amazon.com's engine.

Through the project called Polaris, Walmart reported experiencing an increase of 20% for online product views, and between 10% and 15% increase in shoppers completing a purchase after searching for a product using the new search engine.

The technology was developed in 10 months with a little more than a dozen engineers, which makes me -- and I'm sure, others -- wonder why Facebook has not improved on its on-site search features. The engine groups related terms and phrases, rather than keywords that searchers use to describe products.

It's not clear whether Walmart developed its own patents just for the project, but the U.S. Patent and Trademark Office recently granted Walmart a search-related patent titled "Including hyperlinks in a document."

Ecommerce sites need a good search engine. If Facebook wants to move down the marketing funnel and compete as an ecommerce destination, it will need to improve on-site search.

While Polaris should help Walmart better compete online with Amazon.com, it takes more than a better on-site search engine. It requires integration of online and physical services, which as of last December the company didn't offer.

ecommerce, facebook, retail, search
3 comments about "Walmart Did It - Why Not Facebook?".
Check to receive email when comments are posted.
Read more comments >
Next story loading