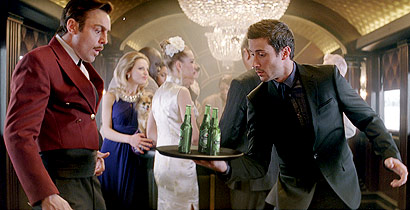 Daniel Craig as James Bond is featured in a global Heineken campaign tied to the new Bond movie “Skyfall.”

Another actor from the movie, Berenice Marlohe, also is featured in the TV and digital effort, both of which launch Sept. 20.

The interactive experience begins where the TV commercial leaves off. Marlohe invites viewers onto a train before it embarks on a voyage through a spectacular vista of snowy mountains. During the journey, a series of grueling tests will lead participants to “Crack the Case” while protecting its contents from ferocious Bond villains.

The campaign will launch globally on multiple platforms through a combination of a 60-second film (TVC & online) with a personalized interactive experience. This combination of ATL, digital, PR and experiential aim to put both the Heineken and Bond brands in front of more consumers than ever before.

The campaign was created by advertising agency Wieden + Kennedy Amsterdam. An exclusive online teaser will be released ahead of the campaign launch to a select group of global Bond “super fans.”

The offline execution of the campaign will bring the drama of the virtual experience “live” to a broader audience across the globe in October. Several markets will host unique Heineken experiences in iconic locations, inviting members of the public to test their nerve, win exclusive prizes and share in the excitement of the global release of “Skyfall” in November.

"The creativity and progressiveness of the Heineken brand combined with the legendary James Bond franchise will provide viewers with high entertainment values,” said Alexis Nasard, Heineken chief commercial officer, in a release. “Not only a hero, Bond is the ultimate 'Man of the World' -- confident, resourceful and ready for new experiences, personifying the values of the Heineken brand."

Heineken has developed a strong and successful relationship with James Bond spanning global partnerships with “Tomorrow Never Dies,” “The World is Not Enough,” “Die Another Day,” “Casino Royale” and “Quantum of Solace.”