In 1975, Pepsi launched their famous Pepsi Challenge, in which blind taste tests were conducted at various malls and pubic locations to gauge whether they would choose Coke or Pepsi. No surprise: the majority of consumers chose Pepsi over Coke. After all, if they’d chosen Coca-Cola, Pepsi-Cola would have buried these results 30,000 leagues under the sea.

The Pepsi Challenge is probably the most “classic” and direct example of the Cola Wars. In recent times, we’ve seen this brought to life in more indirect, tired head-to-head advertising, typically launched during one of the Super Bowls. Pepsi takes a more aggressive, “you’re ugly and your mother dresses you funny” approach, whereas Coke says, “chill out mate. Why can’t we all get along?”

Still, there’s something brave and ballsy about publicly taking on a competitor and letting the product do the talking, versus the creative directors. Along the same vane, probably worth sending props to Domino’s, which took a different, yet related approach with their Pizza Turnaround initiative.

Segue to present day, with Microsoft’s Bing finally ready to shake off its inferiority complex by taking on the mighty Google in a head to head, “blind” taste challenge. In “Bing it On,” consumers can type in any search term they choose and then have to choose between search result A (on the left) and B (on the right) as being the better/higher quality result. Alternatively, they can judge the round a tie. The catch if that they don’t know which search engine is on which side and the order is never consistent. (Sometimes, Bing is on the left and sometimes on the right.)

I took the test. Google won 4-0 with a fifth tied.

My initial reaction was to beat up on Microsoft. Yet another example of PC Guy getting the short end of the stick. In this case, they’d put it out there; let it all hang out…and now everyone was staring, pointing and laughing. Or were they?

On the surface, Pepsi won the Challenge against its bitter rivals, Coke. And yet Coke remained the preferred choice in the market. People use products, but they buy brands. Purchase decisions are typically not logical, rational or functional, but rather emotionally driven.

Malcolm Gladwell critiques the methodology of the Pepsi Challenge in his book, Blink, as fundamentally flawed based on initial “gut” reactions to sweeter tastes. Another way of looking at it was simply that labels do make the difference and when last I checked, we don’t purchase colas with our eyes closed…

So how does this impact Bing?

People have biases. Routines. Ingrained perceptions. And habitual behavior is the hardest to change. When I took the test, it’s quite possible (I’d even argue decisively probable) that subconsciously, I was visually looking for the search results that were the most consistent with my typical Google experience, as opposed to the best quality results.

The real innovation here was getting people to take the test in the first place – regardless of the results. Turning a ! into a ? is probably 80% of the battle in today’s crowded marketplace. Just getting a consumer to doubt the unquestionable efficacy of Google is a victory in of itself.

What if Google’s results aren’t the best results out there?

And with that in mind, I decided to take the challenge again using keywords: Sales Force, Serena Williams, E.T., iPhone 5 and RFiD 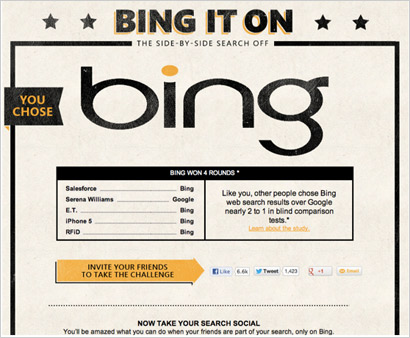 This time, Bing won 4 out of 5 rounds, with the 5th going to Google.

That’s good news for Microsoft. The bad news of course is that functional benefit is not necessary a guarantee of success (see Pepsi)

google, search
2 comments about "Bing It On".
Check to receive email when comments are posted.
Read more comments >
Next story loading