For Laughing Out Loud, It's A New VW Campaign 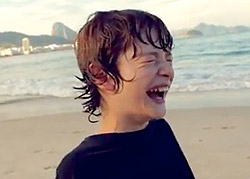 Volkswagen of America is getting social and political -- which might be redundant -- with an ad campaign, "Why VW," whose central asset is a new social-media platform.

Supporting advertising will run on a big media buy around election programming.

The company, whose U.S. sales arm is in Herndon, Va., says the new social platform, WhyVW.com, is intended to give owners and fans of the VW brand a place to go to tout the brand and its vehicles.

Kevin Mayer, VP marketing, Volkswagen of America, Inc., said that the impetus for the WhyVW program was the passion for the brand.

"After our sales success recently, there has just been a lot of chatter both in the press and from our customers," Mayer tells Marketing Daily. “We felt we needed a place to start curating and cultivating the content."

He says the new site is not a short-term program, but a platform meant to become a digital ecosystem for consumer content about the brand.

"When we were talking about it, we said it's not a diet but a lifestyle,” he said. “It's combining great stories with new, searchable content around products and brand."

The TV spot, “Smiles,” is intended to drive consumers to the new site. The ad will air against political programming in advance of the Nov. 5 general election. The idea is that the spot will be a hit because Americans will be desperate for a break from the vitriol, tergiversations, equivocations, rhetorical beat-downs, and general high anxiety as the weeks slouch toward Election Day. How does the spot provide this break? For one thing, there's no talking, which is something we should all be pretty much fed up with shortly. The 30-second ad is really just a melange of people laughing. It shows people of all ages, races, and nationalities caught in moments of laughter. There's no super (except for the tag with the VW logo and "Das Auto" tag).

In addition to season premieres of network sitcoms, the media buy for the ad is focused both on "water cooler media" environments like the presidential debates, and comedy media focused on the election such as "Comedy Central's Indecision."

The company says the new WhyVW.com site, whose content is bifurcated into "Values" and "Stories," has traditional stuff like brand content and info about products and technologies, cheek by jowl with consumer content in the form of personal stories about VW cars.

The "Values" part of the Web site hosts five short films produced by VW, featuring real Volkswagen owners and intended to spotlight VW quality, safety, value, environment and performance. The "Stories" section (on VW.com and Facebook) has the user-generated content, with VW's Facebook page the main portal for storytellers. Volkswagen says it will review content prior to posting -- "And select the stories that best represent the brand and provide the most compelling content," per a release.

To help keep the social-media pump primed, Volkswagen says it will dangle perks like event tickets or Volkswagen gear for participation. The company partnered with Poptent, a digital commons for some 50,000 videographers, for sourcing the five videos featuring Volkswagen owners and their personal stories.

Said Mayer: “If someone wants to learn more about Volkswagen performance or a specific model, they will see relevant consumer stories side-by-side with information we provide.”