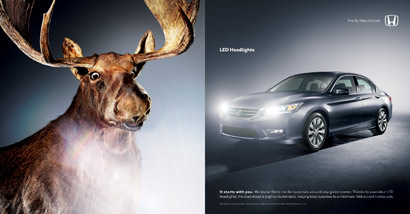 One thing one can look forward to every September, besides respite from the intolerable heat of summer, the incipient apple-picking season and one's kids going off to school, are the fall colors from RPA, Honda's AOR.

Around this time every year, the long-time agency for Honda rolls out its new palette of advertising for Honda's model-year changeover. The agency, like the automaker, is pretty reliable for putting out good creative, but the stakes are especially high right now because we're not talking about a relatively small-volume vehicle.

This isn't about talking crabs for Element or targeted urban-hipness for Fit. It's the Accord, which competes in the withering mid-size segment, the veritable Verdun of the auto market, trench warfare where heads roll with each tenth of a percent of lost share.

Honda's new campaign for the 2013 Accord, "It Starts With You," talks about how the vehicle is user-designed. The focus is technology. Mike Accavitti, VP marketing at the Torrance, Calif.-based U.S. sales arm of Honda said the campaign "Delivers that message while showing what makes Honda different from the competition and the smart choice."

The heavy TV media rotation features ads in which people aren't necessarily ecstatic to be driving. The anthem spot, a 90-second spot (which is a first for Honda), shows people in their daily lives, but avoids some of the cliches of auto advertising in which driving the automaker's car is a transcendental experience of sheer ecstasy.

Instead, in the "We Know You" ad, and followup creative, people are shown dealing with wet dogs, too much stuff, anger and frustration, and distractions. Followup ads that get into vehicle specifics include 15-second spots focused on things like lane departure warning and Honda's LaneWatch blind spot camera system.

"We didn¹t want to show a commercial-perfect representation of life,” said Jason Sperling, SVP and group CD at RPA. “Our characters have flaws. They get mad and pound the steering wheel. Sometimes they are happy, sometimes exhausted, sometimes frustrated or impatient. Sometimes they take their eyes off the road for a split second. Sometimes they just want a moment of peace."

The traditional TV ad buy includes heavy rotation during network premiers of shows like "CSI," "Dancing with the Stars," "Fringe," "Mike and Molly," "Modern Family," "NCIS," "Revenge," "60 Minutes," "The Good Wife," and "The Mentalist." Honda will also advertise during the Emmys and during the MLB World Series, college football, NFL, NHL Winter Classic and regular-season games and the NBA.

Honda also has a complementary Hispanic and African American market campaign. The Hispanic market campaign, via Orci, focuses on achievement without losing one's heritage. In a Honda first, the Spanish-language TV spot will debut on an English-language network when it airs on NBC during the 2012 National Council of La Raza ALMA Awards on Sept. 21.

Other firsts for Honda: the automaker will be among the first in the category to partner with Pulse, a news aggregating mobile and tablet app; and Honda will sponsor NFL video content across desktop, mobile and tablet, including Video on Demand. Online elements include home-page takeovers on AOL, MSN, Yahoo and YouTube.

Honda also says that it will tout the Accord with videos that will run on "connected TV" apps on gaming consoles and Smart TV before movies, TV and music. Honda says the 2013 Accord will also be the presenting sponsor of a new original Yahoo documentary video series, "The Road to Saturday," which follows college football teams as they prepare for an upcoming game. Honda will also tout Accord on the mobile social games "Words With Friends" and "Scramble With Friends."

There's also print, outdoor and online elements that are meant to offer a humorous look at the people and how their foibles demonstrate the Accord features: A woman has really big hair, so she can't see too well on either side, thus making the LaneWatch feature especially useful.

The Accord effort also includes print ads to run in Forbes, People, Wired, the Sports Illustrated swimsuit edition and the Time "Person of the Year" issue. The out-of-home campaign will run in 28 markets and national in-theater will run in October.