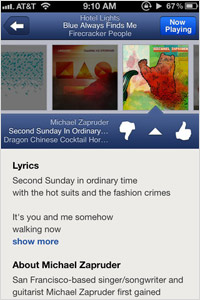 The recent report that Apple plans to launch its own Web radio service sent tremors through the online music industry. As the biggest player in digital music, the company’s expansion to music streaming could have major repercussions for Pandora and Spotify. A new study by NPD Group points to the possible reasoning behind Apple introducing a competing service.

The research firm found that 64% of iTunes buyers also listened to online radio, and nearly 60% use Pandora. That suggests Pandora to date has enjoyed a certain peaceful coexistence with Apple in the digital music space. But that could change if the latter were to start its own radio offering.

“The rising popularity of online radio helps explain Apple’s rumored interest in streaming radio,” said Russ Crupnick, SVP of industry analysis for NPD. “As listening migrates from downloads on laptops to streams on phones and tablets, it would make sense for iTunes to offer customers the same integrated experience they have been known for by adding a streaming capability.”

Online radio and on-demand services remain the fastest-growing form of music consumption in the U.S. in the second quarter, according to NPD. Consumer awareness of Pandora’s free ad-supported radio service represented half of all Internet users, while one-third were also aware of the company’s paid subscription service, Pandora One.

Clear Channel’s iHeartRadio had 25% awareness, followed by Spotify, at 19%, which is twice the level at its launch in 2011. Half of those aware of Pandora used the service in the second quarter, compared to a quarter of those who recognized iHeartRadio or Spotify.

Apple continued to dominate digital music purchases, with iTunes boasting a 64% share of the digital music downloads and 29% share of all music sold at retail. Amazon’s MP3 store was a distant second with a 16% share, followed by Google Play, eMusic, Zune Music Pass and others, each with a share of 5% or lower.

NPD projects the digital music market to grow by about 10%, on a unit basis, this year.

“Despite increased usage of streaming radio and on-demand services, the market for digital ownership is still growing as the market evolves from the desktop to the pocket, and Apple remains well-positioned as the market leader," said Crupnick.