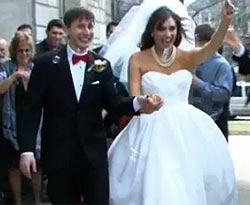 New York Life is hoping to humanize a business that consumers see as arcane and monolithic with a new marketing push that focuses on how it can help consumers perpetuate the good in their own lives.

The first of two TV ads is composed of found video and photographic images of real families and their “moments of good,” with past and present juxtaposed to show how traditions and behavior are passed on. The second ad shows snapshots of different people in a family. Found footage will also be the basis for a series of short online films, per the company.

“We’re in a highly regulated business that has historically been mired in its own jargon,” said Liz McCarthy, SVP and head of corporate communications at the insurance giant. “To achieve our primary goal of connecting with consumers, we need to have a conversation with them. They have to understand us and trust us.”

Media agency TargetCast tcm put the TV portion of the media buy around family-gathering events like Thanksgiving and New Year’s Day, per the company. Ads will run on network, cable and local television stations in select markets during major sports events such as NFL and SEC college football games, and during prime time shows.

The effort also comprises "life lesson" creative in print, digital and outdoor ads that are intended to show benevolent things people do every day. One shows a toddler riding on the front of her mother’s bike and it carries the lesson “#84: Be one of life’s designated drivers.”  Another shows a man walking with a bouquet of flowers with the lesson “#17: If you love someone, act on it.”

The print ads will be in magazines like Time, Newsweek, U.S. News & World Report, People, Parents, Redbook, Money, and Kiplinger’s. Outdoor includes “station dominations” buys in train stations and digital billboards in New York, Boston, San Francisco, Philadelphia and Chicago. Digital billboards will also be in other major markets like Seattle, Sacramento and Cleveland, per the company.

Kari Axberg, head of advertising and branding at New York Life said, in a statement that “People not only understand and relate to what we’re trying to say -- they also immediately begin to share their own life lessons.”

Lee Garfinkel, co-chairman Euro RSCG New York and chief creative officer global brands Euro RSCG Worldwide, said each of the scenes in the campaign is based on real stories. "Some of those stories even came from our colleagues,” he said.

NewYorkLife.com is also revamped with the splash page now showing real people and visual and video components. Gone is the product-category focus, with content now organized around things like family financial protection or saving for retirement. The new site also has a direct "Talk to Us" social-media link connecting consumers to agents.