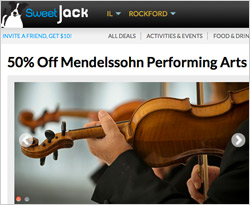 According to Cumulus, over 4 million people have signed up for SweetJack; members can access daily deals for restaurants, retail, nightlife and other local goods and services in each market via the Web site, email and smartphone apps.

Cumulus is pushing the service hard, with roughly 1,400 radio stations in 200 markets set to provide $100 million worth of on-air promotion by the end of the year.