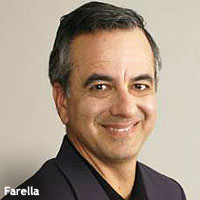 Callas is the No. 2 executive at Maxxcom reporting to CEO Steve Farella. In her new role, Callas is responsible for building the group’s offering and resources. She will work with MDC agencies, including TargetCast, Media Kitchen and RJ Palmer as well as full-service shops like Crispin Porter + Bogusky, as they integrate the growing array of holding company media assets into their individual agency offerings.

“We think of scale as the ability to offer MDC partner agencies and clients assets they didn’t have before,“ said Farella.

One example: RJ Palmer has a branded content unit that will now be available to media and full-service shops throughout the organization. The same is true of Varrick Media Management, which offers digital trading desk services. Certain media planning and buying tools developed by TargetCast also become available Group-wide, as do social media techniques developed by Crispin and other MDC shops.

Callas was previously with Media Storm, which she joined in 2010, and where she was managing director in charge of operations and development.

However, Callas spent most of her career at MediaCom and Grey Media, the Grey Advertising unit from which MediaCom was spun off in 1997. She helped turn that agency into one of the bigger U.S. media shops, helping to reel in such clients as GlaxoSmithKline, Volkswagen, LVMH and Hasbro.

Callas was MediaCom’s U.S. CEO from 2005-07 before stepping up to a corporate role at GroupM, the media management arm of WPP, which acquired Grey and MediaCom in 2005.  She started at Grey in the late 1970s.

Farella approached Callas about the role at the suggestion of MDC colleague Bob Kantor, chief marketing and business development officer at MDC.

Callas said she signed on because the role is “entrepreneurial,” but with the scale and assets of a holding company. MDC, she said, has created “a modern media model with an open platform. There is so much we can do to drive and accelerate growth.”

One near-term focus, said Farella, will be the development of a business science and analytics unit to “better understand client businesses, and how what we do effects that.”

Maxxcom is also exploring acquisitions, although Farella stressed that nothing is imminent. But MDC has greenlit the idea of select and “complimentary acquisitions that can help us build out our assets,” he said. “Specialization will be important to us as we grow.”