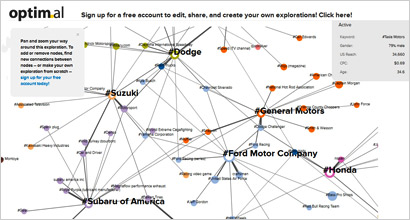 As brands struggle to identify the value and connections of Facebook Fans, engineers and developers at social media sharing, advertising and data companies like AddThis and Optimal have started to figure it out.

The connections made apparent in data become the relationships between interest and intent to target ads online. AddThis sees it in social sharing, so it released a way to integrate offline data with online to better identify and target Web audiences during the purchase cycle.

Similar to AddThis, Rob Leathern, Optimal CEO, said the company is trying to give "data geeks" a different way to look at ad targets by finding insights that were not previously known.

The key behind creating a visual representation of topic relationships on Facebook can connect the dots. So the company built a database of more than two million words related to interests and topics and a tool that Leathern calls Optimal Explorer. Similar to human reasoning, the technology understands the relationship between people and interests. The graphical interface identifies the connection between topics that marketers may not know exist.

The graph highlights keywords, along with the percentage of gender demographic, reach in the U.S., cost per click, and average age. For example, the graph tells us that on Facebook those interested in Tesla Motors represent 79% males around age 34.6. Brands have an option to reach about 34,660 people at a cost of 69 cents per click. The position of words on the page represents the link between topics. The graph moves to help marketers better understand the relationships between words.

The Keyword Expander tool helps advertisers find the most effective keywords for reaching the exact audience through a Web-based graph. Marketers enter keywords such as a brand name, and can see how keywords reach similar audiences, which expand the reach of campaigns targeting the most relevant topics. The company provides the top 15 results of each query at no cost.

Today, the platform supports Facebook, but Leathern said Optimal will release platforms for other social sites -- perhaps LinkedIn and Pinterest.

Companies traditionally brag about the number of Facebook "likes," but an index the company launched in May analyzes more. It considers engagement levels, comments in posts and geographic location. Higher levels of engagement could trump Fans and likes depending on the city or country.