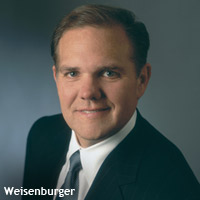 Omnicom’s overarching strategy for building its business has been to create an offering that serves the needs of its bigger clients, which include many -- if not most -- of the top-200 global marketing companies.

That has been a good strategy for attracting multinational clients, said Omnicom Chief Financial Officer Randall Weisenburger. But in some cases, the strategy and the holding company’s offering don’t appeal to companies doing business in one country, the CFO acknowledged.

Even in big countries like China, where Omnicom’s business is comprised predominantly of multinational marketers, local companies go elsewhere for advertising and marketing services. The reason, per Weisenburger is that Chinese national companies don’t want to pay for the level of service Omnicom has to offer.

“We’ve built our business around the needs and demands of top marketers,” he said. “There’s a cost to that, and the nationals don’t want to pay for that.” And he added that once a shop has committed to providing higher-end service that the more sophisticated marketers desire, it’s hard to also provide a lower tier of service that national companies want.

That said, there are plenty of companies in Asia that market across the continent that are Omnicom clients, Weisenberger told investors attending the Goldman Sachs Communacopia Conference in New York on Wednesday.

“Asia is important,” he said, and Omnicom is continuing to invest in building out its offering in the region.

Weisenburger also told the conference group that Omnicom’s full-year 2012 organic revenue growth would be approximately 4%. That would be down slightly from the 5.1% growth the company was able to deliver in the first half of the year. Part of the reason for that, he said, was that some clients may have shifted project spending to the second quarter to avoid the crowded third-quarter Olympic-related marketing calendar.

Weighing in on the question of further industry consolidation, Weisenberger said, “there’s really nobody else.” But then he hedged a little, suggesting it was “possible” that Interpublic, Publicis or even Japanese holding company ADK could hook up with a merger partner.

“We saw the benefits” in the Aegis-Dentsu merger, he said. “We thought the price was high.”