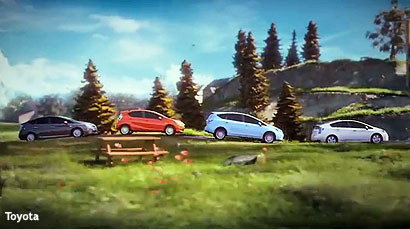 Toyota has launched its second campaign for the Prius lineup, comprising the Prius v wagon, Prius c compact, Prius Plug-in Hybrid, and 3rd Gen Prius. The program kicked off with a new spot showing each of the four Prius cars driving through a scintillating Candyland-colored world of towns, woods, neighborhoods and countryside with the message that there is now a Prius for everyone.

The ad shows each of the vehicles being used in different ways by different kinds of people. Thus the new Prius c, the smallest of the vehicles, parallel parks in a caricature town, while the larger version Pius V is in the driveway of a family of four, and the Prius plug-in model is also featured getting charged up and driven. The ad is set to a whimsical tune that was composed by one of the production guys from AOR Saatchi & Saatchi L.A.

Margaret Keene, ECD at Saatchi L.A., tells Marketing Daily that the campaign, which features both animated characters and photo-real Prius cars, is just the beginning of an effort that will include more TV spots and an extensive, completely new social media program. She says that this campaign, like prior Prius creative, uses a bright color palette, and an optimistic tone. "Colors, optimism and artistry are our tenets for Prius," she said. "So we will have a few more of these with the same voice, tune and animation."

The first campaign for the Prius family of vehicles featured a giant stylized character that -- rather than being animated in a computer graphics program -- was sculpted from real human Pilobolus-style acrobats, who move and change positions to make the giant wake up, brush his teeth and walk outside, where the four vehicles are parked. Then, to demonstrate the diversity of the vehicles, the giant disassembles into groups of the constituent dancers who choose their favorite of the four vehicles.

"We are showcasing the most progressive cars on the planet, so we have to be innovative," she says. "We have to somehow weave the whole family into thirty seconds, and create magic."

Keene says the ads are running on network and cable with syndicated buys as well. The ads flight for the first spot until the 23rd, with second spot airing Oct. 15, with social, digital and print supporting. Marinkovic adds that the toyota.com Web site has also been pretty much completely revised, with a different approach to deep-dives into each vehicle.

Separately, Toyota has launched a campaign, also from Saatchi LA, that ties the Tundra pickup truck to the space shuttle Endeavour. Guess which one is towing which. The automaker has launched a Web site, Toyota.com/TundraEndeavour, and a Web series there leading up to the Oct. 13 event, which will be streamed live.

The Tundra will tow the shuttle toward the California Science Center, its new home. The program is tied to a social-media donation setup where Toyota will give $50 for every Tweet it gets. The first video hints at the physical improbability of the whole "endeavor" as the viability test involved the Tundra having to tow 307,000 pounds of concrete blocks, flatbeds, trailers and gear.