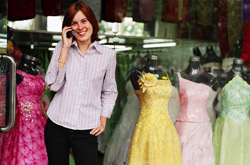 As smartphones continue to gain in popularity, consumers are shopping with them in surprising numbers: A new study from comScore estimates some 85.9 million Americans dabbled in some sort of m-commerce in July, with Amazon coming up the big winner.

“The sheer volume of consumers interacting with retailers on their smartphones really underscores the growing importance of the mobile channel in retailers’ marketing strategies,” Sarah Radwanick, comScore’s senior marketing manager, tells Marketing Daily. “With the holiday shopping season right around the corner, mobile devices are poised to be an essential tool for this year’s shoppers, whether they are in-store or on the go.”

While the study looks at unique visitors that visited one of the brands (either via mobile Web or app) during July, it didn’t measure how much time they spent shopping, nor did it track whether people accessed the sites while actually in a store -- to compare prices, let’s say -- or whether they were sitting at home in a lawn chair.

The study -- based on adults 18 and over, using smartphones running the iOS, Android or RIM operating systems -- says that means four out of five smartphone owners let their fingers do the shopping. Amazon dwarfed all other brands, with 49.6 million unique visitors, followed  by  32.6 million visiting eBay; 17.7 million going to Apple sites; 16.3 million shopping at Walmart, and 10 million at Target. Apps are gaining in popularity, with 4 million visitors checking out Shopkick, for example.

The study found that women are more likely to shop via phone (as they are from their desktop computers) than men. And not surprisingly, younger people are more likely to do so than older consumers: Those between the ages of 25 and 34 accounted for 23.3% of all m-shoppers in July, closely followed by those between 35 and 44, who generated 22.8% of visits.

And brands beloved by Millennials are doing as well as mainstream brands: Etsy, for example, got as many visits as Lowe’s.