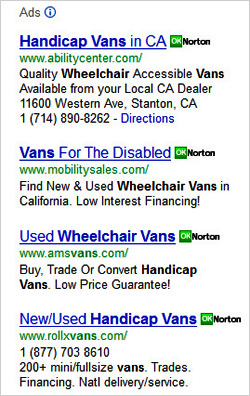 Adobe, IBM and Hewlett-Packard have stepped up efforts to support smaller companies, but Doug Schumacker, digital director of marketing at Braun Corp., seemed a bit surprised when a search expert from HP-owned Autonomy took on the task of improving paid-search campaign results for the manufacturer of wheelchair-accessible vans, ramps, and wheelchair lifts.

Automation software optimizes campaigns more frequently than most marketers at small shops have time to do, Schumacker said. Braun marketers buy about 15,000 keywords for paid-search campaigns. Not many, really -- but enough for the Autonomy platform to quickly pay for itself with this type of performance, he said.

Autonomy, which HP acquired in late 2011, supports Braun through Autonomy Optimost for both paid and organic search campaigns. The platform automatically optimizes Braun's paid-search campaigns to gain the most return from each, depending on objectives. "I tried to explain to these guys we're a small company without tremendous resources to test platforms that simply sound good, but don't work well," he said. "Their response: 'we think you'll really be blown away with the results.'"

The platform optimizes campaigns across Bing, Facebook, Google, and Yahoo. The majority of Braun's campaigns run on Google, but the performance of the company's campaigns on Bing continue to rise, making Schumacker rethink allocation strategies.

During the past few weeks, results on Bing continue to approach the results on Google, Schumacker said. "Either Google is sucking wind or Bing is getting better," he said, referring to targeting intent.