Dogs To Stage Own Occupy Movement 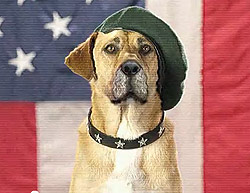 The Occupy Movement is going to the dogs, at least one day next week.

“We’re hoping to tell lots of pet parents about the food revolution that we started at Merrick Pet Care,” Carolyn Hanigan, vice president of marketing for Merrick, tells Marketing Daily. “We’re a very small company, and we want to create a movement similar to what Jamie Oliver did in his ‘Food Revolution’ for people.”

On Tuesday, Oct. 2, representatives and fans of Merrick will “occupy” the park to distribute information about the reformulated food. The company has invited fans and celebrities to stop by and show their support.

“We felt it was important for dogs to have a voice to bark out to the world that they want very nutritional food,” Hanigan says. “We want to use this event in New York City to take the opportunity to have a sit in and talk to pet parents that come through in Union Square.”

In addition to public relations efforts and wild postings in New York, the company and its agency Carmichael Lynch Spong have created a promotional video featuring a beret-clad German Shepherd launching the food “revolution.”

The video, entitled “Tails from the Revolution,” calling on all dogs to perform their “duty.” “For too long, we have succumbed to the discourse of our main course,” the dog says in grainy video. “Our own kibble kiboshed by the very hands that feeds us. To this I say, ‘No more!’” The video goes on to proclaim that dogs should eat “what they [owners] eat: Food from the kitchen. Food that’s locally sourced. Food worthy of a fork.”

The revolutionary mascot is expected to appear at the rally, Hanigan says. If things go well on Oct. 2, the company is open to staging other events in other cities. “We plan to see how this one goes, and then we would love to have the movement go to other cities where the occupiers have been,” she says.