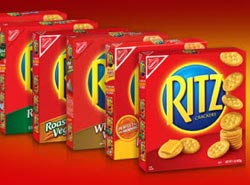 For the second year in a row, Ritz Crackers is the most favorably perceived snack brand among U.S. consumers 18 and older, reports YouGov BrandIndex.

The rankings are based on the researcher’s Impression Score, which asks consumers: "Do you have a general positive feeling about the brand?" Scores range from 100 to -100 and are compiled by subtracting negative feedback from positive. A zero score means equal positive and negative feedback.

Both men and women agree that Ritz and Lay’s are their favorites. However, men rate Doritos higher and Fritos and Orville Redenbacher lower than women.

YouGov BrandIndex interviews 5,000 people each week day from a representative U.S. population sample, more than 1.2 million interviews per year. Respondents are drawn from an online panel of more than 1.5 million individuals.