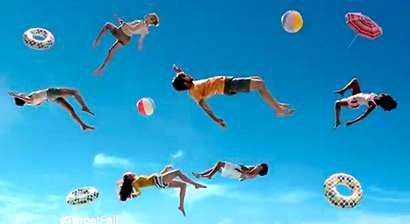 Target may be a mass merchandise giant, but it’s going high concept this fall. In addition to an ethereal new fall campaign, which features actors, clothing and baguettes pirouetting through the sky, it has also made its first short film -- “shoppable” content that allows viewers to buy while viewing.

The ads, from Partners & Spade, are likely to get plenty of attention as observers try to guess which direction the Minneapolis-based chain will take after its unexpected split with Wieden + Kennedy early this year. And while the Connie Francis soundtrack is likely to sail right over the heads of most of Target’s fashion demographic, viewers won’t miss the flight of anything else: The spot uses more harnessing and rigging effects than a “Peter Pan” revival. Models tumble through the air in summer clothes before falling into new duds, then plopping into their seats at an outdoor dinner table.

“Like a modern dance performance mid-air, it’s more Cirque du Soleil than commercial,” the company says in its blog post about the new work, “and features all the Target Style fall fashion we’re falling for this season.”

Meanwhile, Target is billing “Falling for you” as a “shoppable film,” a romantic comedy starring Kristen Bell, Zachary Burr Abel, and Nia Long and directed by Phil Abraham, who has worked on both “Mad Men” and “The Sopranos.” The film is scheduled to air in three online episodes, and then again in completion, with bonus material, Oct. 10.

The storyline follows a few Target employees trying to stage a fall fashion event, who fall in love along the way. But the gimmick is that viewers are able to click on what they see, ordering this actress shoes, for example, or that actors’ coffee cup. The company says the film will highlight fall fashion, beauty and home products, and tie into the broader “Falling for you” marketing theme: “Viewers can, for the first time ever, shop and share product seen in each episode without interrupting the film.”