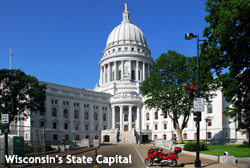 Wisconsin will spend $2 million this year on a branding campaign to promote the benefits of starting, expanding or locating a business in the state.

The brand has been under development for months. It is geared toward entrepreneurs and business leaders. Creative aims to highlight the state's workforce, natural resources, research institutions and infrastructure.

Gov. Scott Walker says the new $500,000 "In Wisconsin" ad campaign to be run in Wisconsin, Illinois and the Twin Cities is designed to help create private-sector jobs in the state.

The new brand features an image of the state with the word "in" inside of it. The logo is modified for each of five companies selected to highlight the campaign.

The $500,000 media buy will run from October through December in Wisconsin and Minnesota and Illinois. The program will have “continued visibility through 2013 and beyond,” officials said.

“Our goal is to reinforce the commitment of in-state business owners within our borders and increase business and economic development activity in our state,” Jadin said. “While it’s always our goal to attract new companies from outside our state, we also want businesses in Wisconsin to know we are here to support them with their growth and expansion strategies.”

Companies that will be featured in the campaign are Organic Valley of La Farge, an organic dairy farmer cooperative; Rockwell Automation, Milwaukee, an industrial automation and information company; Schneider National, a Green Bay transportation and logistics company; Trek, of Waterloo, manufacturer of bicycles and related products; and Virent of Madison, a company that uses naturally occurring renewable resources to replace crude oil.

As part of the campaign, the agency has established www.inwisconsin.com as its new Web address. Nelson Schmidt Inc. of Milwaukee and Madison helped develop the branding effort and launch the campaign.