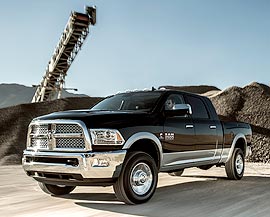 It's time for the Texas State Fair. “Fair” probably isn’t the right word for this event, which is kind of the apotheosis of state fairs and all things Texas. It's the largest such event in the U.S. (although Minnesota may be nipping at its heels), and brings in around 2.5 million attendees every year. It’s also big on trucks.

In addition to having a "Truck Zone" showing different makers' vehicles, individual companies have their own venues and almost all the automakers making trucks have a presence there, with Chevrolet as a major sponsor, and Ford, Ram, Toyota (which builds trucks in Texas), Chevrolet and sibling GMC doing their respective things at the Dallas event, which runs through Oct. 21.

Chevrolet, for example, which has been "Official Vehicle of the Texas State Fair" for a decade, has a big footprint this year. Besides a Chevrolet Main Stage (which will have something like 40 acts, including Kellie Pickler, who has done concerts for rival Ram), there's a "Chevrolet Town Square." It will have a test track where people can drive the portfolio of vehicles; the "Chevrolet Tuner Tent," which focuses on the Sonic sub-compact car, and Sonics that have been customized by designers and enthusiasts; A "Volt Charging Lounge"; and live music from local country musician Jolie Holliday.

Toyota, which also has title sponsorship of a music stage at the fair, tends to use the event to show SEMA-style take-offs on its Tundra truck. Last year it used the show to reveal a “pre-production Tacoma Toyota Racing Development (TRD) T|X (Tacoma Extreme) limited-edition pickup truck.” This year? It's probably not going to be the "Ultimate Fishing Tundra," which, per Toyota, gets its first showing at the 2012 SEMA Show in Las Vegas on Oct. 30.

Chrysler's Ram Truck division got started early. The fair officially opens Sept. 28, but Ram was there Thursday morning, live-streaming the reveal of its commercial line of Heavy Duty and Chassis Cab models.

Ram CEO Fred Diaz was on hand to talk about improvements in the new trucks, and how the brand has grown over the past few years. And he announced that Ram has launched a dedicated Ram Commercial division comprising separate product development and support teams. "You can't be all hat and no cattle," he said, and added that at the retail end, Ram will grow the commercial showroom significantly.

Diaz said that since 2009, when Ram spun off from Dodge, the truck brand has been in major construction mode. "In the last 24 months we have made 20 product actions, averaging one a month," he said. "We are launching the 2013 Ram 1500 next quarter, and the Ram Heavy Duty after that." He added that two major intros in back-to-back quarters is unheard of in the truck business. Ram, he added, has seen 28 months of consecutive year-over-year sales gains. And over the last two years has grown share -- over 3.5 points of share last year, and this year an additional 2 points of share.