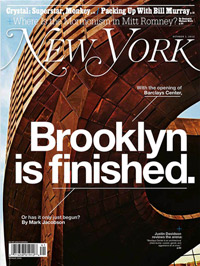 Magazines’ digital advertising is paying off, according to an eMarketer report, which says they will lift overall magazine revenues in coming years, despite decreases on the print side. Magazines may finally be “over the hump” in their transition from print to digital publishing.

Thanks to digital advertising’s growing contribution, total magazine ad revenues will increase from $18.3 billion in 2012 to $18.6 billion in 2013, $18.8 billion in 2014, and $19 billion in 2015, per the same eMarketer forecast. (These figures don’t include new circulation revenues from digital subscriptions, which are also growing fast.)

Looking at digital advertising’s proportional contribution to magazines’ bottom line, its share of total ad revenues will increase from 17% in 2012 to nearly 21% in 2015, while print ads’ share will shrink commensurately.

New York  is on a roll, according to Crain’s New York Business, which reports that the magazine is posting recording profits and revenues. Total revenue for New York Media was up 6% in the first half of 2012, following an 11% increase in 2011. In terms of digital revenues, a critical growth area for consumer publications, digital ads contribute 40% of the company’s total ad sales, compared to an industry average of 5%-15%.

Since 2004, the magazine has also won more National Magazine Awards than any other title over the same period. Crain’s credits editor Adam Moss with leading the revitalization of the magazine, which was bought by Bruce Wasserstein for $55 million in 2003. New York Media is also busily launching new publications, including New York Design Hunting, launched in May; in August, it relaunched its fashion blog, The Cut, as a standalone site targeting women.

Out Celebrates 20 Years with Lexus Partnership

Out is celebrating its 20th birthday with a new partnership with Lexus, which will be the presenting sponsor of the magazine’s October 2012 20th anniversary collector’s issue. It will include 20 iconic images from 20 years of the magazine, with accompanying essays by famous writers. Lexus is also sponsoring a Lexus-branded, custom-created content channel on Out.com. On Oct. 9, Out and Lexus will host the “Out 20th Anniversary Presented by Lexus,” a celebration at W Hollywood’s exclusive outdoor oasis, Station Hollywood.

Havens Named President of The Atlantic