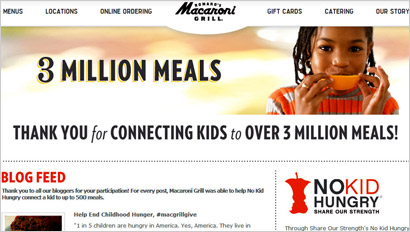 The results far exceeded the chain’s original goals, which were $100,000 or 1 million meals, according to chief marketing officer Brandon Coleman III.

Romano’s was among numerous restaurants (including Arby’s, Corner Bakery Café, Denny’s, Joe’s Crab Shack, Restaurants Unlimited and Ted’s Montana Grill) that participated in 2012’s Dine Out for No Kid Hungry. Each year, during a designated week in September, restaurants offer various promotions to help raise money for the cause. This year, the official week was Sept. 16-22, but more than 6,500 restaurants elected to extend their campaigns through the end of September, according to the Share Our Strength site.

Romano’s opted to run its own campaign for the entire month, from Sept. 1-30, and leveraged social power, as well as an in-store donation program.
Romano’s’ fundraising elements included:

* Giving diners who added a $2 donation to No Kid Hungry to their checks a coupon good for $5 off of their next visit to the restaurant chain.

* Donating one meal (10 cents) each time that a fan shared a photo from the Mac Grill Give Facebook Gallery, or tagged a tweet or an Instagram photo with #macgrillgive.

* Enlisting leading food and mom bloggers. Romano’s donated $50, or 500 meals, when bloggers tagged #macgrillgive to a recipe, message or photo of their favorite Italian meal on their blogs.

The “share and tag” initiative was valid up to 150,000 shares, while the in-restaurant donation program was unlimited.

In addition to rallying guests and team members to aid an important cause, the social elements of the campaign helped Romano’s connect to a younger audience, and generated 60 million impressions through social media and 40 million earned media impressions, according to Coleman.