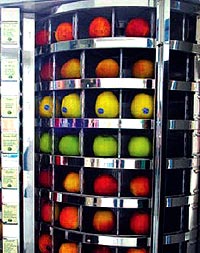 “Healthful” foods and beverages used to be segregated in their own grocery aisles or areas of restaurant menus.

Not anymore. Today, food producers, manufacturers, chefs and retailers are increasingly integrating more healthful, sustainable and tasty options alongside the more “indulgent” ones across all kinds of channels (even vending machines), points out a new Culinary Trend Mapping Report on “The New Healthful.”

The report identifies seven current “new healthful” trends that are in various stages of adoption, from ones just gaining traction among creative chefs and adventurous diners (stage 1) to those that have become mainstream and can be seen on QSR menus and traditional grocery store shelves (stage 5):

On a commercial scale, this approach requires a top-notch filtration system, getting the flavor and sensory aspects of the beverage just right, and delivering an enjoyable overall experience. This trend has so far been seen mostly in fine-dining restaurants, but it has significant potential for chain restaurants and even CPG manufacturers, in the researchers’ estimation.

2. Heirloom whole-grain bread (stage 1):  A growing number of independent bakers are promoting locally sourced, heirloom grains and creating recipes to showcase these grains’ distinctive flavors and textures, as well as the health benefits of whole grains.  As more consumers are exposed to such breads, they will seek them out in more mainstream venues, including restaurants, in-store bakeries and deli counters.

3. Beans and green beans for breakfast (stage 2):  Interest in breakfasts enriched with vegetables and legumes is being reflected in some restaurant menus, and in recipes and photos being shared by bloggers and Pinterest users. These options go beyond a token leaf of spinach, to include breakfast wraps with copious amounts of roasted vegetables, beans and quinoa, and even “breakfast salads.”

Such offerings are relatively easy for restaurants to create, using pre-cooked vegetables and pre-prepared fillings -- and CPG makers could readily translate these concepts into frozen breakfast sandwiches and wraps and innovative potato cakes and bowls, points out the report. These options could also appeal as snacks or meals for other day parts.

4. Healthful vending (stage 2): Companies geared to providing healthful food alternatives via vending machines are finding plenty of outlets to access hungry people with replenishing food, including schools, workplaces, gyms, sports arenas, airports and hotels. And there is growth in development of more nutritious products created specifically for vending use. Oatmeal kits, grab-and-go tuna, fresh-cut fruit, vegetables with dips and organic bowl salads are just the beginning of “what could be a significant new market for development,” say the researchers.

5. Vegan on the menu (stage 3):  The demand for more vegan choices on menus is growing as new vegans join the longer-term faithful. This is true in mainstream chains, as well as specialty cafés -- but there’s still ample opportunity for offering more vegan-centric options, at retail as well as in foodservice.

6. Chef-inspired healthful kid fare (stage 4):  Chef-prepared, culinary-inspired meals that make healthful meals taste great to kids are among the latest approaches to tackling the obesity crisis among American kids. Chefs are using local, sustainable ingredients and adapting authentic global recipes for younger palates for hotels, schools and summer camps, and government and private partnerships are providing support for expansion of these initiatives.

7. Veggie burger renaissance (stage 5): Using new food-processing technologies and better ingredients in meat substitutes, CPG makers have taken the lead in offering non-meat burgers with texture and taste suitable for broader markets -- real alternatives to standard meat burgers or even the increasingly popular “better-for-you” varieties of meat burgers. The researchers expect CPG products to continue to show innovation with new protein blends and flavor profiles. However, they note that restaurants (particularly QSRs) and in-store grocery delis have some catching up to do in this area.
The report recommends that food makers and restaurants recognize that the demand for “flexitarian” foods that offer protein as well as good taste and texture will continue to grow -- as will the need for ingredient transparency. Among other implications, this means that food providers should be setting up new supply lines for healthful, raw ingredients.

Focusing on flavor is also critical. “Healthful foods don’t have to be tasteless, without any good-for-you fat or interesting flavorings,” the researchers stress.