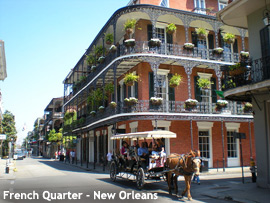 Visitors to New Orleans during the first half of 2012 spent 11% more compared to the same period in 2011, according to the city’s convention and visitors bureau.

The number of visitors also increased with the city hosting 4.9 million visitors in the first half of 2012, an increase of 2% over the same period in 2011. Visitors spent a total of $3.45 billion.

"As we plan our marketing approach for 2013, these first half year results show that our use of both traditional and online media tools are working well as we communicate the authentic experience that New Orleans provides to visitors," said Mark Romig, president and CEO of the New Orleans Tourism Marketing Corporation, in a release. "We have an amazing product that gives us a competitive advantage over other destinations, and we will work to continue to aggressively market these authentic experiences."

Of the 4.9 million visitors to date, 74.1% were visiting New Orleans for vacation/pleasure, 14.3% attended conventions, associations, corporate meetings and/or trade shows, and 11.7% were in New Orleans for general business. Of all visitors, 50% stayed in a hotel, while 26.6% were visiting friends and relatives. The average number of nights stayed by visitors was 4.1 nights.

On the spending front, per-trip expenditures among visitors were up in all categories except for shopping. The largest jump in per-trip expenditures was in bars and nightclubs, with a 27.2% increase from the same period in 2011, and in lodging, with a 18.1% increase from 2011. More than half of business visitors to the New Orleans area (60%) extended their stay for pleasure for an average 2.1 days.

Tourism is one of New Orleans' largest employers. According to research for the full year 2011, New Orleans welcomed 8.75 million visitors, and visitor spending hit $5.47 billion, a significant increase over 2010 and the highest spending in the city's history.

Repeat visitors (comprising 55.8% of all visitors) are dedicating time to take part in several activities during their visits. Research results show that they are frequenting the World War II Museum, Audubon Zoo, Insectarium, Aquarium, New Orleans Museum of Art, parades, fine dining and casual dining more on repeat visits than on their initial visit.

The survey also revealed that while Louisiana was the top feeder market (12.6%) for New Orleans, the next most popular states for visitation in order were Texas (9.5%), Alabama (5.6 percent), California (5.5%) and Florida (5.3%). At 2012's half-year mark, 91.4% of respondents reported that they were very likely or likely to recommend New Orleans as a destination to their friends and family. Almost half (44.2%) of the respondents reported that this was their first visit to New Orleans.