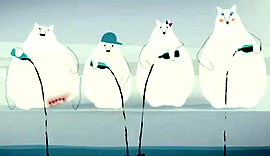 The Center for Science in the Public Interest has accelerated its long campaign to reduce consumption of sugary beverages with the release of an animated short film focusing on the topic.

The film tells the story of a family of polar bears who (in the words of CSPI's release), "even in their distant Arctic environment, are not immune to sunny marketing messages from Big Soda."

Over-consumption of sugary sodas leads to the family developing obesity, tooth decay and, in the case of the father, Type 2 diabetes (which causes erectile dysfunction and ultimately, amputation of a leg). In the end, the bear family is shown dumping their sodas into the ocean, as screen messaging states: “Dump the Unhappy!”

In announcing the video’s release, CSPI executive director Michael F. Jacobson said: “Coke and Pepsi have skillfully cultivated incredibly strong emotional bonds with consumers around the world, even though their products actually cause quite a bit of misery. ‘The Real Bears’ seeks to sever some of those bonds, and to get people thinking about what they’re drinking. We don’t have their budgets, but we do have the truth. And the truth is that soda equals sadness.”

Bogusky, who helmed advertising campaigns for Burger King, Coke Zero, Microsoft and the anti-tobacco “Truth Campaign,” is quoted as stating: "I like the taste of soda, I've had my share, and I don't imagine a world without soda. But the reality is that over the years sugary drinks have gone from an occasional treat to an everyday, every-occasion beverage. This project attempts to contrast the marketing hype around soda with the stark reality, and it is my hope that it makes some small contribution to a critical cultural awakening. We need to begin to connect the dots between what we are sold, what we eat, and how sick we have become."

The video is viewable at TheRealBears.org, where visitors are being encouraged to share the content through Facebook, Twitter, Pinterest and Google+, because “sharing is the only means we have to make sure the unhappy truth about soda gets out to the world.”