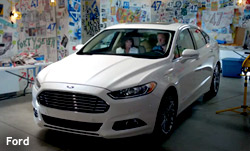 It may have taken a near-death experience, but Ford’s chief marketer says he can boil the automaker’s recent success down to two simple words: “Pilots. Scale.” That test-and-learn mantra has become the company’s rallying cry, says Jim Farley, group VP of global marketing, sales and service for Ford Motor Co., after the recession pushed it to the brink of failure.

“We test it, and if it works, we scale it right away. It’s allowed us to innovate where others have gone on autopilot. It’s not a very fancy message,” he tells attendees at the Association of National Advertisers’ Masters of Marketing conference. “But it’s just as important as the shiny new things.”

Farley says paying close attention to the gaming and tech industry, for example, led the marketing team to breakthrough thinking for the Ford Fiesta. “Those industries are really big investors in pre-launches, like sneak peeks where they invite journalists in to create buzz, and develop demand before the product even really exists.” But in cars, that was never done. “If you talk about the new product, who would buy the old one?”

Social media solved the problem. “We allowed people to opt in and so they were self-selecting. They weren’t going to buy the old car anyway, so we could show them the product a year ahead of time.” That gave Ford time to react and respond to potential buyers’ surprising requests: They liked the European colors better, for example, “and they told us they wanted a cupholder sized to their Red Bull.”

Since the car had “zero name-plate recognition in the U.S.,” Farley says its idea of giving 100 of the new cars to social-media whiz kids for six months was a key part of the strategy. “At first, people inside were like, 'We can’t let young people drive the cars -- what if someone smokes weed in it?’ And we did have … incidents,” he concedes.

But the payoff was great. “Ford didn’t launch the car; our Fiesta agents did. Auto writers interviewed these agents, not executives, and it produced 28 million views,” he says. “We had 60% nameplate awareness before we ran one traditional ad, and we had spent nothing. That showed me the power of social media.”

As a result, he says, the company now earmarks 20% of every launch budget for pre-launch activities, and pays careful attention to creating content that truly interests and engages consumers. Those include things like the Mustang Differentiator, and the Random Acts of Fusion campaign with Ryan Seacrest. “But to do social right, you’ve got to listen. Customers complain, and you've got to get it right.”