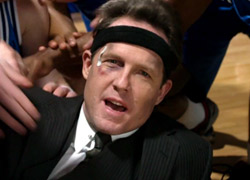 One of the world’s most popular ad campaigns was almost DOA.

Within five hours of the airing of the first Mayhem commercial, with Mayhem (a/k/a actor Dean Winters) viciously keying a car in a parking garage, “email inside Allstate exploded,” Lisa Cochrane, SVP of marketing for Allstate Insurance Co., tells attendees at the Association of National Advertisers’ Masters of Marketing conference. Agents didn’t just hate it -- “they kept asking, 'Are you sure we know what you’re doing? And what happened to Dennis Haysbert?’ There was a lot of pressure inside to kill the campaign.”

Allstate had not done any pre-testing, she says -- and in fact, never does. Instead, she relied on the gut-check question: “I just asked myself, 'Would I want to watch this ad?’” Because she knew upper management trusted her, “we were able to tell everyone to calm down, back off, and give us a few days.”

Quickly, she says, the benefit of embracing Mayhem became clear, and since its launch, calls to Allstate agents are up 17.5%.

What has been surprising, she says, is how quickly Mayhem left the control of Allstate and marched into the public lexicon, right down to its appearance in a new song from rapper Lupe Fiasco, released just two weeks ago. “Once a big disruptive idea gets picked up by the people, you don’t own it anymore. You co-own it.”

What has also been surprising, she says, is the way the company’s two disparate campaigns -- Mayhem on one hand and the “Are you in good hands?” with Haysbert -- have come together, with the Haysbert spots now embracing a little mayhem themselves. She credits Leo Burnett, its agency of 54 years, with helping to push the fusion between the two efforts. “Mayhem,” she points out, “just keeps on giving.”

Actor Winters not only introduced Cochrane, but actually used his status as Chief Disruption Officer to whistle her offstage at the end of the session, too. “You’re done,” he said, interrupting ANA chair Bob Liodice mid-question.