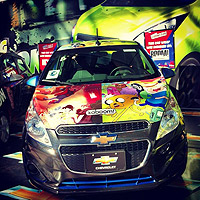 Chevrolet has found a pretty interesting way to talk to Millennials about its Spark vehicle. The car should appeal to young creative, multicultural urbanites. If it doesn't, then a lot of other automakers -- Scion, Ford, Dodge -- made some dire miscalculations with cars like Fiesta, Dart, xB and iQ. But sales numbers from the past few months have been driven by subcompacts and micros -- cute cars priced to move and designed for urbanites -- so someone is doing something right.

And where better to reach the above-mentioned eccentric 20-somethings than an event like New York Comic Con, the festival of all things graphic, superhero, horror, sci-fi and animation, where the attendees -- acolytes, really -- are as much on display as the companies there to show their stuff? Chevrolet had several Sparks there over the weekend, as part of a program to build brand awareness without being intrusive.

(Parenthetically -- and I mention this because of how far this cohort will go to be noticed, how serious fans of the comic/anime world are, and the quasi-religious wackiness of the 120,000 or so people who will have headed to the Javits Center this weekend to wander the halls -- I was heading down 33rd Street after the Chevy event when I was shocked to see that one of the wildly attired people heading in the opposite direction was a woman in superhero tights, but absolutely nothing on top. "Is there a superhero called 'Super Topless?" I thought, wondering if she would be turned away at the door, or given a VIP pass.)

Chevrolet, whose Spark is not topless (yet), has a sizable footprint at Comic Con, including an array of Sparks at the show floor entrance that have been re-skinned with popular anime characters from four different comic art shops. Chevrolet is handing out something like 60,000 swipe cards to attendees as part of a promotion dangling one of the Sparks as grand prize. The Sparks will also be infused into an Oct. 17 video shoot by MTV featuring K-pop band Wonder Girls, 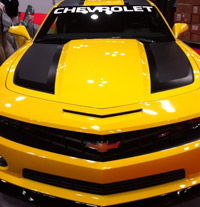 There's also a more traditional Chevrolet exhibit area showing an assortment of modified vehicles, including a "Transformers" Camaro. There is also a display in "Artist's Alley," where a Spark and Sonic have been wrapped in whiteboard material on which a roster of animation artists will draw characters. And Chevrolet is also doing a ride-and-drive outside the Javits Center.

Chevrolet couldn't just show up and do its usual auto show display, for reasons that should be obvious, as a heavy-handed presence would be like driving cars down the apse of a church (okay, maybe that's a bit of an exaggeration, but Comic Con types take their characters seriously). "We did not want to not act like Chevrolet would in any other event. So we worked with [show organizer ReedPOP, a division of Reed Elsevier] to come up with initiatives that would be organic and relevant," says Bill Fleck, Chevrolet's sales manager for the Northeast region. This is Chevrolet's second year at the show; last year it focused on the then-new Sonic compact and had a version of the car that floated around the hall above the show floor.

Fleck tells Marketing Daily that the Camaro display this weekend will include a guy in a yellow Transformers costume designed to convert into a representation of the Bumble Bee car from the “Transformers” movie à la the toys on which the robotic movie characters were based. Per Fleck, the guy in the costume was actually an attendee at last year's show who just happened to show up at the Camaro display to do his thing with the costume, which he spent a lot of time designing and building. Chevrolet consequently hired him to attend other Chevy events.

Larry Settembrini, sales director at ReedPOP, tells Marketing Daily that Chevrolet is the only consumer brand with a formal partnership with Comic Con. "This is a very passionate, tight-knit community of comic, anime and music fans," he says, "So Chevy is coming in from the outside. They have to be authentic, and we don't want multiple auto companies involved. Our reputation is on the line. We had lots of conference calls and meetings before we mutually agreed it was the right fit for both sides. It was very collaborative, which we don't typically do." He says a wrapped Camaro toured to several Comic Con fan events around the country this year and last, and that Comic Con is also touting the Chevrolet presence on its Web site. "As organizers, we are walking a fine line because our fans are the people who own the show. We run it for them, so it's about the fan experience. And they are very protective of their community.” 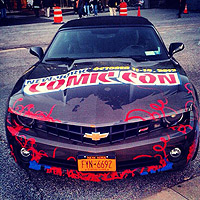 Fleck says that while Chevy will do lead generation and run a promotion, it's purely about awareness. "This isn't a 'promote today, sell tomorrow' type of thing. It's about branding as much as retail sales."

Chevrolet, through its relationship with ReedPop, will also be at Pax East, the largest gaming convention in the eastern half of the U.S. The Boston event, in April, will also integrate into the gaming community with smaller vehicles.

Fleck says the assets from Comic Con, such as the array of painted Sparks, will be seen elsewhere. "We had an owner-appreciation event in Lake Placid in January, at Ski Hill so we brought the wrapped Sonics from last year's Comic Con there. It made sense because snowboarders wound up checking them out. And in Hershey Park we had the Transformer car and the guy with that Transformers costume."