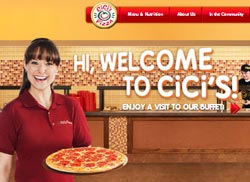 Market Force first calculated favorites based on the total number of votes, then indexed them by factoring in the number of locations for each chain.

By region, CiCi’s ranked #1 in the Northeast, Midwest and West, while Papa Murphy’s was the favorite in the South.

Market Force’s site will show the survey’s full results, including charts, by Oct. 17.