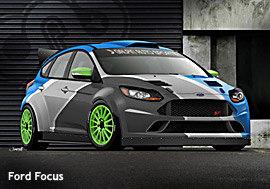 If you love cars, and can only go to one auto show in your lifetime, you should probably skip public days at Detroit's Cobo Hall and finagle a press pass (or an invite from a friend who makes pickup truck bed liners) and hot-foot it to Sin City for the SEMA show.

Once an inside-baseball event pretty much focused on practical aftermarket gear for trucks and work vehicles, and where automakers didn't have a huge presence, the Specialty Equipment Market Association brouhaha (Oct. 30 to Nov. 2) is now a gigantic automotive muscle beach for just about every vehicle category. It is a place where, in recent years, automakers have begun to figure out its influence in shaping the emotional vector of consumer consideration.

And, yes, normally sane automakers can go a bit crazy there, with customized cars and trucks packed with enough audio, performance gear, and various geegaws to make, say, your average Civic about as roomy as the cockpit of an Apache attack helicopter. A few of them probably even fly.

And this is the biggest SEMA show since it began over 40 years ago. The organization added something like half a million square feet, and has the most exhibitors -- some 2,300 -- it has ever had, plus some 3,000 press attendees, and major exhibits from eleven automakers. There are more vehicles from more companies with more paint schemes than a box of Ike's and Mike's and a barrel of Skittles combined. 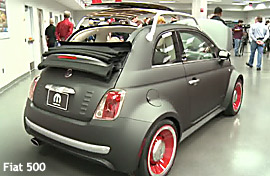 Chrysler Group will have no fewer than 24 vehicles in a 15,300 square-foot exhibit. The company is using the cars to tout Chrysler's in-house parts house, Mopar as much as the six Chrysler divisions: Chrysler, Jeep, Dodge, Ram, SRT and Fiat. A special emphasis will be the new SRT Viper, a re-imagining of the Corvette fighter. The exhibit will showcase a Mopar customized Viper as well as the car's V10 engine (okay, it's not going to be one of the above-mentioned fuel sippers, but that would pretty much defang the snake, no?)

Ford says it will have dozens of customized display vehicles under its SEMA DreamCase exhibition umbrella. Though everything will be represented, Ford's letter of show is "F" as the automaker will show candy-colored, modified versions of its newest vehicles, the 2013 versions of Fusion and  Focus. Ford went outside to custom shops for its modified lineup. Chevrolet will go very big this year. But watch this space, as the GM division is keeping it close to its chest until Friday.

Peter MacGillivray, VP of events and communication at SEMA, explains that smart OEMs do awareness-generating lead-up campaigns and then activate with attention-getting events at the show.

MacGillivray tells Marketing Daily that while some OEM's cycle in and out of the show, "one that gets it is Lexus. They are there no matter what. They know it's good for their brand, and customers expect it. "SEMA has such a high concentration of evangelists that you have to come with something authentic and something buzz-worthy, and if you get it, it pays off in spades; if you miss, then it can go very wrong for you," he says.

He also points out that a couple of years back SEMA began awarding vehicle manufacturers who had the most vehicles on the show floor in a particular category. The choice of winner, in other words, is based purely on numbers: the vehicle most represented on the show floor, where some 1,000 vehicles are on display, wins for that category. Last year Jeep Wrangler was most popular 4x4 on the floor, for example. Camaro was the most popular vehicle for two years in a row.

Last year, when SEMA created a sport-compact category "Hottest" awards, Fiat won. And that is a big deal because, far from being a sideline, the SEMA Awards may be more representative of a vehicle's popularity than traditional vehicle-of-show kudos based on panels of auto writers. If independent exhibitors are favoring Fiat 500 over other compacts, it almost means by definition that the car is both in demand and emotionally charged in a good way. "This isn't insignificant really when you consider the investment exhibitors make in these cars and trucks," says MacGillivray. "It says a lot about the popularity of a vehicle."