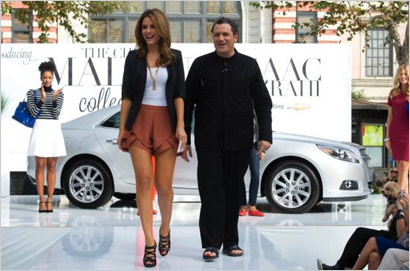 Fashion designer Isaac Mizrahi is now putting a special collection on sale at LivingSocial, the local-market Web retailer. Buy now because it's a limited run, and especially if you have a jones for Chevrolet's new version of the Malibu mid-sized car.

That's because the six-piece collection, which went on sale this week, is really the culmination of a three-month program involving Chevrolet, Mizrahi, Time Warner, Inc., and LivingSocial. The strategy: build awareness for Malibu among fashion-forward women in major markets by giving the car a certain Mizrahi je ne sais quoi.

The program is centered as much on Mizrahi's quest to get inspiration for Malibu-informed apparel as on the apparel. The designer travelled to four cities and met with four women whose input he used to arrive at ideas about which features of the car might be most effectively transmogrified into clothing. Those adventures are detailed in a series of videos at  www.chevymalibustyle.com and facebook.com/IsaacMizrahi.

The former site also lets visitors use an editing tool called Polyvore to create Malibu-inspired fashion collages. That element of the site is linked to social media so people can throw it out there for friends. The program is also updated on Twitter @Chevrolet and #MalibuStyle.

The line of apparel includes a pillow-stitched leather jacket inspired by the stitching on Malibu seats; a cobalt blue Malibu tote bag informed by the hue of the interior illumination in the car, as is a light blue tailored shirt, and pink Malibu driving moccasins.

A spokesperson for the automaker explains to Marketing Daily that the Time Warner connection let Chevrolet advertise the fashion program, Malibu and the reality-style video series via print ads in titles like InStyle and People popular with women. "This really was a collaboration. And it was a great opportunity for us to reach style conscious women; it's a natural fit for Malibu."