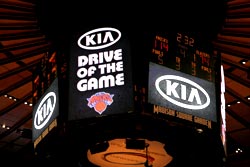 Kia Motors America is extending and expanding its deal with Madison Square Garden, wherein Kia becomes a signature partner and official vehicle of the venue. The new partnership should give Kia some of what it has needed for years: awareness, affinity and positive brand perception.

The deal gives Kia a big placement at the Theater at Madison Square Garden, tie-ins with the New York Knicks, the New York Rangers and the New York Liberty, and presence around college basketball and tennis, as well as the Concert Series at The Garden. The partnership also includes an expanded presence for Kia on MSG regional sports networks, MSG and MSG+, and integration on the Garden, Knicks, Rangers and Liberty websites. Also, Kia vehicles will be on show year-round with a custom-built display space in the lobby entrance to the Arena.

Kia's Official Vehicle designation will include branding at the Arena for all associated sports events and the Concert Series. Kia gets digital and static signage throughout the Arena; features on GardenVision, the center-hung scoreboard; and on-court and on-ice branding and promotional contests. Kia will be there for the Concert Series that includes Madonna, Justin Bieber, One Direction, The Who and Neil Young and Crazy Horse. Kia will have a presence at all Friday night Knicks and Rangers games as the presenting partner.

Tim Chaney, executive director of marketing communications at Kia, points out that the automaker is not new to the Garden as it has had a seven-year relationship with the Knicks plus sponsorship of the the Rangers NHL team, activated with the New York Kia dealer group. "But this is the whole building all year long for multiple years." Beyond this, Kia is official vehicle of the NBA, and also has separate, individual sponsorship deals with 14 NBA teams. "But this really is the first of this scale for us; being a signature partner gives us exclusivity to select categories," says. He tells Marketing Daily that New York, media central, is the place to have this kind of deal. "And if you are going to have a presence in New York, this is the property to do. He adds that the Garden's multi-year, billion-dollar investment in facility renovation also works as a complement to Kia's own packed vehicle-launch schedule. "We looked at it simply: transformed Kia at the transformed Garden."

There's also a CRM element with Kia customers getting access and experiences with MSG's sports brands and events. The automaker says it will collaborate with the Knicks and Rangers on a number of promotions and events also for Kia customers. Some of the offers include tickets and special experiences at games. As the official vehicle of the Concert Series at The Garden, Kia will also work with MSG on promotions for select concerts.

Dave Kissel, president and CEO of Chicago-based sports-event media network InStadium, says the virtue of a major sponsorship deal like Kia's is that, among other things, it locks out the competition against an audience a marketer determines to be spot-on for its brand. "But even for the most well-funded brands you can't lock up every thing. So even the big guys have to be careful about how and where and when they spend money on sponsorships. But, clearly, sponsorship does work as part of the overall media mix. It's a $23 billion market; clearly, it works."

Indeed, Kia is not the lone auto brand with category-exclusivity in the Big Apple: across the East River, Honda in August became the 10th brand to hitch its star to the new Barclay's Center as a top-tier sponsor, becoming official vehicle of both the Brooklyn Nets and the arena itself. Among other things, Honda will sponsor the Brooklyn Hoops Winter Festival in December.