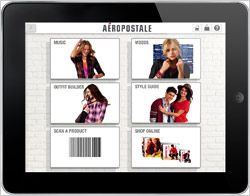 Apparel retailer Aeropostale aims to entice its young clientele with a new concept store outfitted with iPad-powered displays, offering everything from e-commerce to in-store music selection.

The company’s revamped outlet at Roosevelt Field Mall in New York launched Friday boasts four iPad kiosks placed around the store, which the brand’s teen shoppers can use to create their own outfits.

In addition to providing a style guide that allows users to view their new looks, they can email assembled outfits to friends for their input or to themselves.

Developed with mobile and multichannel technology company Usablenet, the kiosks also offer an optimized version of Aeropostale’s Web site to place orders to ship home and dig up hard-to-find items. Another feature geared especially to the retailer’s high-school-age customers allows them to use the iPads to vote on music playing inside the store.

"The new concept store is the latest step in our initiative to provide our shoppers with a unique and innovative experience,” stated Mary Jo Pile, EVP of customer engagement at Aéropostale. “It’s about creating an environment where our customers feel at home and free to engage in their lifestyle while shopping.”

Based on customer response, a company spokesperson said Monday that Aeropostale will decide over the next few months whether to extending the technologies to any of its other retail locations. The company operates 913 Aeropostale stores in the U.S., including its flagship presence in Times Square.

Along with its high-tech elements, the Roosevelt Field mall location is intended to evoke a New York City vibe with the iPad-equipped fitting rooms designed to suggest different city neighborhoods including SoHo, the West Village, Williamsburg and Park Slope.

For its part, Usablenet has previously given similar upgrades to retailers such as U.K.-based Marks & Spencer. Its stores incorporate Wi-Fi, touchscreen kiosks and iPad-toting sales associates. It has also created mobile sites and apps designed to sync with in-store shopping to bridge the digital/brick-and-mortar divide.