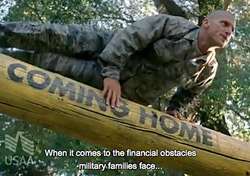 USAA, which has provided insurance and financial services to active-duty and military veterans (and their families) for 90 years, wants to be more than a vendor for its customers. In a new marketing campaign, the company positions itself as uniquely qualified to help them through all stages of life.

“The objective is to position us as a destination of choice among military families regarding advice,” Chris Owen, USAA’s vice president of integrated marketing, tells Marketing Daily. “These are challenging times, and more than ever our members really need our help.”

With a new advertising campaign, USAA wants to show that it can help in every aspect of military service from deployment to returning home and beyond, Owen says. A television spot shows active-duty military running through an obstacle course as different challenges are super-imposed on the obstacles (a climbing wall has the word “debt” written on it; a heavy load a soldier has to carry reads “retirement”). The scenes then cut to soldiers returning home as a voiceover states that they understand the needs of military personnel better than anyone. “Life brings obstacles. USAA brings advice,” the voiceover concludes.

Though USAA is already well-known among active-duty and retired veterans as a provider of financial services, the effort is designed to move the relationship with its customers beyond simple transactions to one that is more relationship-oriented, Owen says.

“We’re really uniquely qualified to help them through every stage of life,” Owen says. “We know what deployment means and we know how to guide them through it, both going out and coming back. We really want them to think of us as a partner and a very close ally and one that they can trust.”

In addition to the television ad, there will be print, digital and social components as well, Owen says. The commercial will run on cable and broadcast networks, with a heavy emphasis on sports programming, Owen says. Campbell-Ewald in Detroit handled creative for the campaign, while Initiative Media is in charge of media duties.