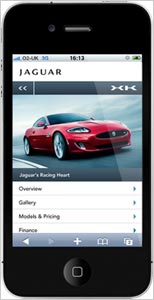 People are using mobile to shop automobiles. This year, 31% of in-market vehicle shoppers have visited automotive Web sites via their smartphone, compared with 24% the year before and 17% in 2010, per J.D. Power and Associates just-released 2012 Automotive Mobile Site Study.

The survey-based report also says these same shoppers use third-party sites and manufacturer sites at similar rates (69% and 68%, respectively) and that 53% of these in-market shoppers access automotive content while physically at the dealership.

The new study looks at the effectiveness of automotive manufacturer mobile Web sites when it comes to engaging shoppers who use smartphones during their vehicle-shopping process.

In a tie, Acura and Kia rank highest in the study, with the former doing well in information/content, while Kia performs particularly well in speed and appearance. Following Acura and Kia in the rankings are Mazda (789); GMC (787); and Jaguar and Ram in a tie (785). After Ram comes Toyota, Chevrolet and Hyundai. Among brands whose mobile Web sites are below industry average are Mini, Cadillac, Dodge, Ford, and Honda.

The study reports that the top five uses to which consumers put their phones during the shopping process are vehicle pricing (66%), model information (54%), photo galleries (53%), vehicle reviews/ratings (52%), and vehicle comparisons (47%). For their part, automakers have in the past two years radically upgraded design, layout, navigation of their mobile sites, per J.D. Power, which says in the past automaker mobile websites were text-based, with linear layouts and small text links for trackball and cursor navigation.

The firm says that a good guidepost for those looking to redesign is the fact that this year the sites that did best had large, dynamic images and links that are suitable for touch-screen use. They also have more content, and as such are a lot like what you'd expect to see on larger screens and traditional laptop formats, not to mention tablets of various sizes and configuration. "Previous mobile websites featured limited content as a supplement to desktop websites," per the firm.

"As usage trends continue to shift, mobile website developers are challenged to bring satisfaction up to par with that for other devices," said Arianne Walker, senior director of media and marketing solutions at the market research firm. "Many of these challenges involve providing the content that shoppers want without sacrificing speed, consistency and ease of navigation, as well as providing a visually appealing site for smaller screens."