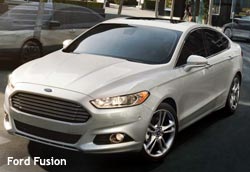 Once upon a not-so-long-ago time, describing a vehicle as a great-looking midsize car was like saying you admire Soviet-bloc housing. Not any more. Midsize cars are cool again, and Ford may be the iPad of the bunch in terms of raising the bar. The 2013 Fusion -- to be timely -- looks like something James Bond might be happy driving -- without the martini.

To make the point, Ford is doing a print campaign for the car that uses a non-computer device (is that an oxymoron?) to make competitive cars disappear when the Fusion drives past. The campaign, like the one just launched for the C-MAX hybrid, grabs for an established artist. In this case it's Liu Bolin, whose art you may have seen, but there's a good chance you didn't realize it. His métier is painting objects in such a way that they appear to become invisible. He does this by painting upon the object precisely what would be visible were the object not there at all, assuming a specific, camera-friendly perspective.

The effort, executed on a Los Angeles street, makes cars parked in front of a bistro seem to vanish when the Fusion appears. Ford says this is the first time the artist has done work for a brand.

The ads hit magazines like Esquire, Elle Décor, Wired, The Economist, Sports Illustrated and others throughout the month. The new print ads -- which will appear in national automotive and lifestyle publications -- say things like “First rule of taking the world by surprise?  Do something the world will actually notice.”

“We wanted to make a provocative statement with the all-new Ford Fusion, to shake up a segment that isn’t exactly known for stylish cars,” said Jim Farley, group VP of global marketing, sales and service, in a statement. Ford says Bolin flew from China to L.A. to oversee a group of Hollywood studio painters to do the details of the scenery.

Ford isn't alone in eschewing computer-generated images for handmade art. The above-mentioned C-MAX campaign uses a very low-tech method of line-drawn caricatures by the studio responsible for continuing the "La Linea" animations. But Toyota, which did use CG for its new Prius family campaign, has generally gone out of its way to make a statement about the Prius by making a statement about animation: in prior ads Toyota has used dancers, acrobats and flowers as creative elements.

The launch campaign for Toyota's Prius v involved the director of photography for such Terry Gilliam projects as "Brazil," "Time Bandits," and "Baron Munchausen" in which Hollywood set painters from back in the day painted real sets on which creative narratives were filmed.

Daimler's Smart division turned that on its head with an experiential program this spring where people could play the old-school computer game Pong using real Smart cars as paddles, as a way to demonstrate the vehicle's performance and handling.