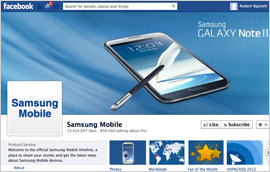 Facebook’s shares shot up Wednesday after it released third-quarter results showing the company was making progress in building its mobile ad business. But the company is still trying to convince marketers that spending money on Facebook advertising is worthwhile.

It launched a series of studies with comScore aimed at demonstrating the effectiveness of using paid advertising on Facebook in tandem with earned media like page posts and branded applications. The “Power of Like 2” report released in June set out to show that a combination of paid and “organic brand messaging” can influence purchase behavior.

The latest white paper in the series, released Wednesday at OMMA Social, takes a closer look at how paid and earned media can boost reach on Facebook. The key takeaway is that brands can reach five times as many people by using advertising to amplify page content. That’s based on a selection of 100 top brand pages on Facebook.

A test campaign for each brand was run during a week in June, focused on three sets of metrics: total and per-post branch reach, audience demographics and behavior; and shopping and buying of paid audience versus average online audiences.

In addition to finding that ads extended reach by five times, the case studies showed:

*Paid media can extend the reach of a single piece of content by more than 100 times. It can also amplify average lifetime reach of all page posts in a week by two to 24 times.

*Paid and organic audiences have similar age distributions -- three percentage points of each other.

*The audience reached via paid media for those three brands showed greater shopping and buying behavior than the Net average. Users viewing ads in the Samsung campaign, for instance, were 24% more likely to shop online.

Ads used in the campaigns could appear in the newsfeed, Ticker or on the right-hand side of the page. Those placements had eight times the engagement rate and 10 times the recall of ads running in the right column.

Separate data released by Facebook ad partner Spruce Media this week showed newsfeed and mobile ads helped increase ad rates and click-through rates overall on the site. It said CPMs on Facebook were up 27.5% worldwide in the third quarter, compared to the year-earlier period, while click-throughs increased 57%.

As the click rates improve, Facebook is getting more clicks per ad viewed, “which means they can offer lower CPCs to attract more spend from advertisers and still make more revenue per ad viewed,” according to the Spruce Media report.

Facebook reported that total ad revenue increased 36% to $1.09 billion in the third quarter -- with 14% of that amount, or about $150 million, coming from mobile.