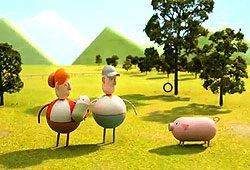 Videos celebrating the use of locally sourced food for the creation of burritos, a woman’s first day of retirement after having recently lost her husband and the story of a young man who uses Sharpie markers to draw on disposable coffee cups are among the third group of 10 “Ads Worth Spreading” from TED Initiatives.

An initiative designed to “recognize and reward innovation, ingenuity and intelligence in advertising,” TED’s Ads Worth Spreading looks to showcase ads that married content with technology. “TED began Ads Worth Spreading to provide a platform for conversations about creating not just effective advertising, but great content,” according to the report. “It was an opportunity for the advertising industry to step outside of itself and see how it fits in the zeitgeist.”

For the first time, TED employed ACE Metrix to test each of the 10 advertisements with consumers to see how they performed for a U.S. audience. The point, says Ace Metrix CEO Peter Daboll, was to show the videos were more than just creative exercises.

“They approached us because they wanted an extra level to show this was about accountability, not a beauty contest,” Daboll tells Marketing Daily. “What we found was that, in general, these are top-tier ads.”

Often, however, audience reactions to the ads were different than the creators may have intended, Daboll says. In one ad for Prudential, a woman was starting her retirement after having recently lost her husband, and told the story of the changes in her life. Although obviously intended to be inspirational, a portion of the viewers found the story sad (7% found it “depressing”), although they gave it high marks anyway. “I don’t think they realized how saddening and dark that came across to viewers,” Daboll says. “Those are the things that research and data don’t show you.”

In the case of Chipotle, for instance, a two-minute stop-motion animated video telling the story of a farmer who creates a big corporate farm, realizes the error of his ways and goes back to creating a small farm, set to a hypnotic version of Coldplay’s “The Scientist,” was often cited as “long” by many of the respondents.

“Viewers were a little confused by it -- they didn’t know what it was about, they didn’t understand how the music related to the animation,” Daboll says. “That probably wasn’t exactly what they were going for. “

On the flip side, not one person cited a three-minute ad for Sharpie, telling the story of a young Malaysian man who began drawing illustrations on coffee cups, as “long.” “People thought it was such as compelling story,” Daboll says. “Sharpie was focused on that. It wasn’t about Sharpie; it was about this person and what he was able to do.”

An ad for Mazda, one of the longest of the videos selected, also received favorable notices from the consumer panel, despite containing subtitles. “Usually, subtitles are the kiss of death for attention scores,” Daboll says. “This one scored pretty high on attention and it was inspirational. It was high in information and emotion and attention.”

Ultimately, the entire endeavor, from selecting the ads to having an audience rate them, is intended to be instructive to the advertising industry about the importance of strong storytelling, purpose and authenticity in the current fragmented media landscape, Daboll says. “One of the themes that came out of this was that television [advertising] needs to be more accountable,” he says.

The full Ads Worth Spreading report (along with examples and commentary) can be found here.